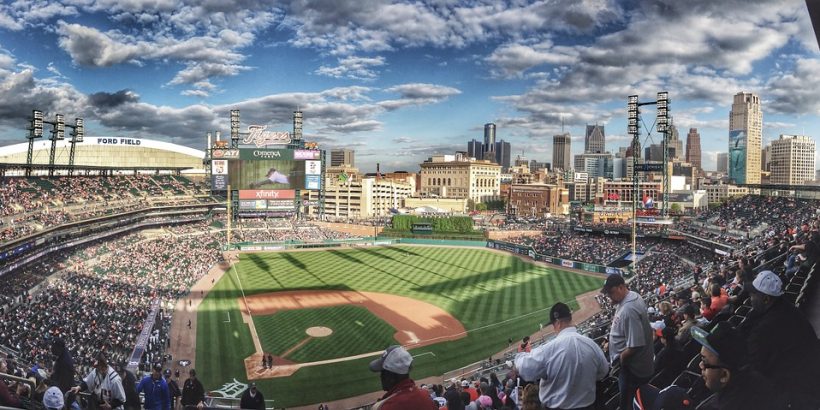 The white Victorian house was built in 1908, with all of the stereotypical charms of the era.  The front porch was created in a different time, a time when people would walk on the sidewalks and chat with their neighbors.  Off the living room was a small parlor.

That parlor holds a special memory for me.

During my childhood, the parlor served as my Dad’s study, and it was sacred ground.  My Dad was a college professor for 38 years and spent countless hours grading exams and preparing for class in that parlor.  My two sisters and I knew one rule better than any other:  if the door to Dad’s study was closed, he was NOT to be disturbed.

When the door was open, however, his study became a special place.

Dad had a small black and white television on the bookshelf of his study.  He had a leather recliner facing the television and an office chair in which a young boy could watch sports beside his Dad. It was there that I watched my first baseball game.  I was in my Dad’s study.

I watched my first baseball game in my Dad's study. Baseball became a bond between Father and Son. Click To Tweet

My Dad and I loved baseball and would listen to many evening games on the radio sitting on that front porch in the picture above.  He had grown up listening to baseball on the radio, and it was his preferred method of catching a game.  I’ll never forget the feeling of sitting on that porch in the summer evenings, imagining the plays as they were described over the airwaves.  It was a special place, it was a special time.

During our frequent games of catch in the front yard, we’d imagine I was Al Kaline (he was always my favorite player) in the Tiger’s outfield as my Dad threw the ball high into the air.  “It’s going deep into right field, he’s back on the warning track and makes the grab!”, my Dad would announce as I snagged the certain home run ball inches over the top of that outfield wall in my mind.

I remember the first time I saw Al Kaline in person.  I was six years old, and my Dad let me take my baseball glove to the game at Tiger Stadium.  We sat in the bleachers deep in right field, directly behind my hero Al Kaline.  We were so close I could actually see the name Kaline on the back of his jersey!  It didn’t matter that I could hardly see home plate.  I was there with Al Kaline. More importantly…

…I was there with my Dad.

Over the years my Dad and I went into a Tiger’s game nearly every year.  It was my highlight of the entire baseball season, and I treasure my memories of those seats at the old Tiger Stadium.  The stadium was build in the grand old age of baseball, back in 1912.  Yes, it was built in the same era as my childhood home, perhaps that’s a factor in why they both hold such a special place in my heart.   We always got tickets in right field, right behind Al Kaline.  With the limited resources of a teacher’s salary, they were likely the best seats we could afford.  It never mattered to me, I always looked forward to watching Al Kaline.  Besides, it wasn’t the game that really mattered.

I left for college in 1981, and my annual trip to Detroit with my Dad came to an end.  Our last trip into Detroit was on February 11, 1984.  I should mention that, in addition to baseball, my Dad and I had also enjoyed watching boxing matches on T.V. over the years (also in his study).  On that February weekend in 1984, I had two British friends who came home with me for a weekend from college.  When my Dad found out they were boxing fans, he offered to take us into Detroit to watch the World Champion Thomas “Hitman” Hearns defend his title against Luigi Minchillo.  Of course, we jumped at the opportunity and were there in person as one of the greatest boxers in history won one of the 61 victories in his 67 fights (!!).  The fight went the distance, and the hometown crowd was crazy in support of Thomas Hearns.  Click below for a few minutes of the excitement, you may hear me yelling with the crowd if you listen closely…

Watching Tommy “Hitman” Hearns box in downtown Detroit’s Joe Louis arena is a special memory in my life and one that my Dad and I talked about hundreds of times in the decades since.  It’s hard to believe that was the last time my Dad and I were in Detroit together.  Life interceded, and I became busy with my family, my career and my commitments.

A Baseball Game With Dad

Now that I’m retired, I’ve got time to do the things that really matter.  I was talking to my Dad a few weeks ago and he mentioned that his group of guys never made it to a Tiger’s game this year.  They’d gone every year, but they’re all getting older and it wasn’t going to happen this year.  I could sense the disappointment in his voice.

As soon as I got off the phone, I looked at the Tiger’s schedule.  There were only a few weeks left in the season, but fortunately, there was a home game at 1:00 pm on Labor Day. It’s only 600 miles from our retirement cabin to Michigan.  Sure, I was planning on going to FinCon to meet some of my blogging buddies, but they could wait.  My Dad is 86 years old, and I know my days with him are numbered.  The choice was obvious.

I booked the best seats I could find, just 24 rows up behind the batter’s box.  Close enough to read the names on the back of the jerseys.  Just like the old days, only better.   My Dad deserves the best.

I drove to Michigan for the weekend, and my Dad and I talked excitedly about going to the game on Monday.  As planned, I picked him up at his assisted living apartment in time to get to the ballpark early.  I treasured every minute of our two-hour drive to the ballpark, talking about how many times we’d made this trip together when I was a child.  We talked about life, we talked about retirement, we talked about getting old.  Just like when I was a child, there was something special about heading to a baseball game with my Dad.

We always enjoyed having some extra time in the stadium before the game started, and it was important to keep our tradition alive. We arrived early and took our time walking into the stadium. We found a place overlooking the outfield to sit and have a hot dog.  We talked about Al Kaline.  The memories from my youth came flooding back.  I was at a Tiger’s game.  I was sitting in the outfield. 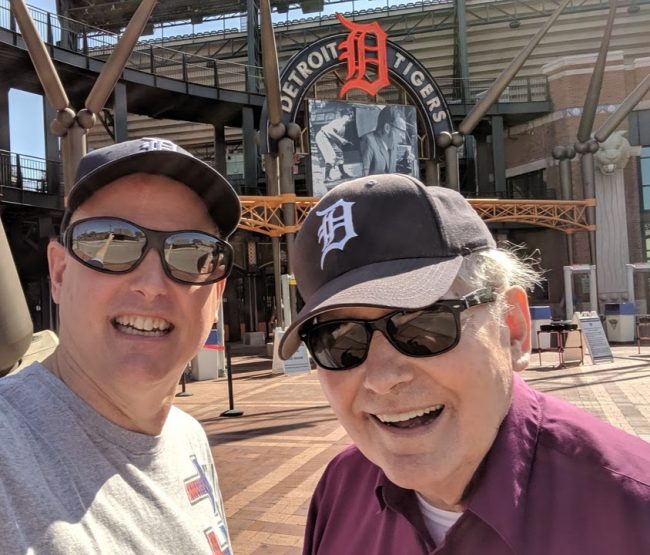 We took a few breaks as we strolled around the stadium on our way to our seats behind home plate.  Comerica Park is certainly not Tiger Stadium, but they’ve done a great job commemorating the history of the Tigers with photographs and mementos from each decade placed along the concourse behind the stands.  We spent a lot of time in the area that highlighted the 60’s and 70’s.  We saw pictures of Al Kaline.  We both smiled at the memories.

I savored every minute of my time at the ballgame with my Dad.  The Tiger’s are in last place, but it didn’t really matter.  We had great seats, the weather was perfect, and it was a great game.  More importantly…

Impossible as it may seem, the day got even better when, halfway through the game, my Dad shouted out “There’s Tommy Hearns!!”.  He pointed up to the JumboTron, and my eyes turned to see our hero, Tommy “Hitman” Hearns sitting in the front row, right behind the batter’s box.  I glanced down toward the field, and saw the boxing legend sitting just 24 rows in front of us!

We realized that the last time we had been in Detroit together was for that boxing match in 1984.  Our conversation drifted from baseball to boxing, and we spent an hour talking about Tommy Hearns and our memory of watching him box in Joe Louis arena.

As the game moved into the 9th inning, I noticed Tommy Hearns starting to gather his things.  It became apparent that he was going to leave a few minutes early, and would be walking up the aisle just 15 seats to our left.  I quickly told my Dad, “Come on, we’re going to go meet Tommy Hearns!”.  His eyes lit up with excitement, and we made our way past the chairs and out into the aisle.

We were just in time.  Tommy was approaching our row just as we stepped out into the aisle.  I explained to him that my Dad and I had seen him fight in Joe Louis Arena back in 1984, and would be honored if we could get our picture taken with him.  He smiled, and my dad and I posed for what will likely be remembered as our favorite photograph of our lifetime:

We couldn’t stop talking about Tommy Hearns for the rest of the day.  It was a special moment between Father and Son, knowing that we’d just had an experience that both of us would remember for the rest of our lives.

It’s a sad reality that my Dad’s getting older, and I know my days with him are numbered.  That’s really what the baseball game was all about, and I think both of us knew it.  With only a few weeks left in the season, our time together is limited.  When the season is over, it will be too late.  You can only watch a game when the team is on the field, and it won’t be long until that field is empty.   I’m treasuring every minute I get with him in the latter innings of the game, and I’ll miss him when he leaves the field. Retirement affords me the privilege to never miss a chance to do what needs to be done, and few things were more important than spending time with my Dad while he’s still on the field.

The season is almost over. You can't watch a game when the players leave the field. Spend your time doing the things that matter, with the people who matter most. Click To Tweet

I’ll treasure forever the memories I made with my Dad during that September afternoon in the final weeks of the season. It wasn’t because I was able to watch the Tigers play a game on a beautiful fall afternoon.  It wasn’t because I met a world boxing champion who I had idolized in my youth.  The reason I’ll always treasure that Labor Day baseball game in Detroit was simple.

I was there with my dad.