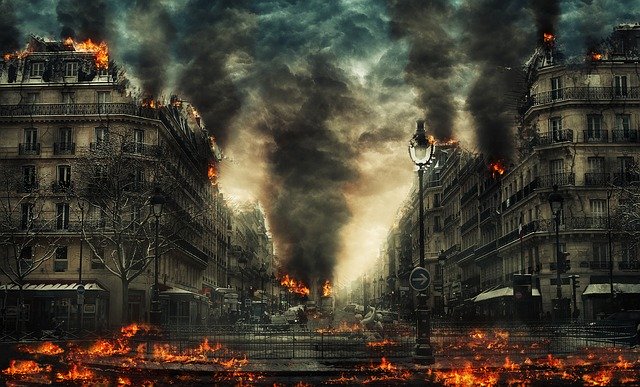 I enjoy reading studies to see what we can learn, especially when they focus on the most common retirement mistakes.  What regrets do other retirees have, and what can we learn from them?

Today, we’ll take a look at one such study and discover that 43% of retirees have regrets, as well as outlining the most common retirement mistakes identified by the study.  Along with identifying the mistakes, I’ll add my commentary on steps we can all take to avoid them.

What are the most common retirement mistakes, and what can we do to avoid them? Click To Tweet 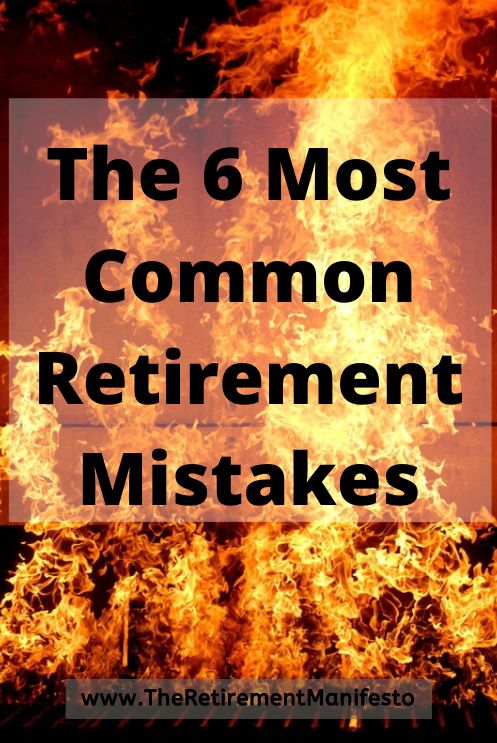 The 6 Most Common Retirement Mistakes

We’re all afraid of making mistakes, especially when it comes to our retirement planning.  What are the most common retirement mistakes, and what can we do to avoid them?  Fortunately, we have some insight into that question today.  This one’s a “must-read” for anyone in their final 5 years of work.

The University of Michigan recently released a study titled “Subjective Expectations, Social Security Benefits, and the Optimal Path to Retirement”.  The comprehensive study was based on data pulled from 4,632 adults and entails an intimidating 57 pages.  I’ll save you the task of reading the study and summarize the study in today’s post, along with some of the study’s charts (because we all love charts, right?).

Below is a summary of the most common retirement mistakes, including my thoughts on how best to avoid them.

1. Too Optimistic About Anticipated Retirement Benefits

The report states that we all have biases that negatively impact our decision-making processes, and a common retirement mistake is being overly optimistic about anticipated retirement benefits.   Social Security makes up 85% of individual income for those at the bottom quartile of retirement income, and many folks don’t really understand what their social security benefits will be when they make their decision to retire.  Further, they’re optimistic about their cost of living, and fail to recognize the gap they’ll have between their spending needs and their social security income.

This misplaced optimism leads many to under-save for retirement during their working years, creating a compounding effect on their retirement income in their later years.  Many people, unfortunately, end up living a life in retirement that is below their expectations.

To Avoid This Mistake:  The study found that those who were the least knowledgeable about their retirement benefits were the same ones who tended to be overly optimistic.  The solution:  Take the time to understand your future retirement benefits BEFORE you make the decision to retire.  Preparation is the key to avoid this common retirement mistake.  If you’re nervous about making the decision without professional help, hire a Certified Professional Planner to help you run the numbers.  This is one mistake you must avoid.

Those who earn higher incomes are more likely to be those with higher financial knowledge.  Their premise is that higher earners have a drive to learn financial planning concepts to manage their higher wealth.

Lower earners, conversely, are less likely to be knowledgeable about financial planning.  This lack of financial knowledge leads low earnings to be more likely to make the first of the common retirement mistakes, being overly optimistic about retirement benefits.  The result is lower social security literacy among those who need it the most, a dangerous combination.

To Avoid This Mistake:  If you’re a low earner, do NOT use it as an excuse to be uneducated about your personal finances, especially related to your future social security benefits.  Low earners tend to be more prone to making retirement mistakes, so be especially careful in making your retirement decision if you’ve not accumulated significant wealth.

Among those participants who were already retired, 43% stated they “would want to be able to change something about their current retirement”, as shown in the chart below.  Regrets were inversely related to educational levels.

43% of retirees have regrets and want to change something about their current retirement. What are the top regrets? Today, we review them. Click To Tweet

Top among the regrets?  Social Security claiming age, with 22% citing regret over when they chose to start their Social Security benefits (20% of retirees would have liked to have claimed later). 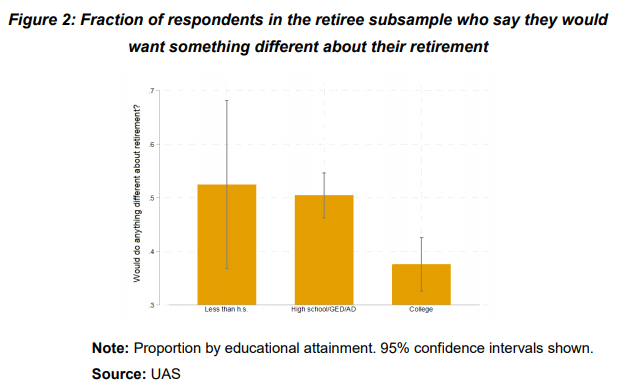 Among retirees with regrets, the majority of those regrets focused on their lack of income in retirement.  Retiring too early is one of the common retirement mistakes that’s very difficult to correct, and folks who retire before their finances are sufficient to support your retirement lifestyle often face regrets for years.  37% of the respondents with regrets wish they had continued working longer than they did.

Many of these retirees had unrealistic assumptions about their retirement benefits (see Mistake #1), with 21% of respondents citing their benefits were substantially different than they had expected.  Again, those with lower educational attainment were the most likely to be receiving Social Security benefits lower than expected. 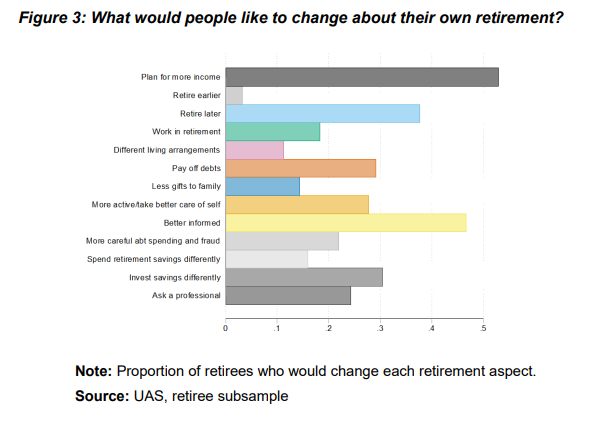 To Avoid This Mistake:  If you’re unsure about your retirement decision, don’t be in a rush to leave the workplace.  Consider working One More Year, like I did. Use the additional year to do a deep dive into your numbers and make sure you fully understand the implications of your timing decision before you pull the trigger.  Having a bit of a “cushion” in your numbers may cause some discomfort in working a bit longer, but it’s likely preferable to spending your years of retirement with regrets.

Among survey respondents who were not yet retired, more than 50% stated they do not have a good estimate of their future Social Security benefits.  Further, 12% of those who expect to retire at age 65 assume they’ll be receiving benefits above the current legal maximum.  Seeing this lack of knowledge of social security in pre-retirees is concerning, especially in light of the number of retirees who have regrets over their lack of income in retirement. 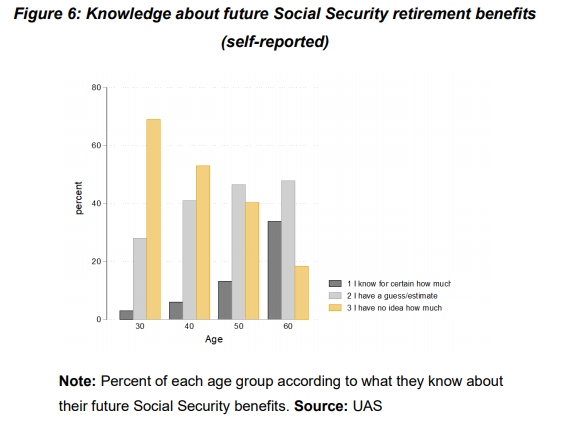 To Avoid This Mistake:  If you’re among the 40% of those in the age 50 bracket who have no idea how much Social Security you’ll receive, it’s time to get serious.  In my final 5 years of work, I entered my estimated Social Security income for various claiming ages in a spreadsheet, every year.  They’re available at ssa.gov, and you shouldn’t retire until you’ve logged in and confirmed that you’re using realistic assumptions for your social security benefits.

Another of the common retirement mistakes is the lack of planning many folks invest in their retirement decision.  Based on this study, only 30% of folks in the sample adequately determined their retirement needs and developed a plan to ensure sufficient income was in place to cover the requirements.

Considering the common retirement mistakes cited earlier, a solid retirement plan would be an appropriate approach to mitigate our innate behavioral biases.  Without this plan to double check our assumptions, the combination of these mistakes leads to poor decision making and future regrets in retirement. 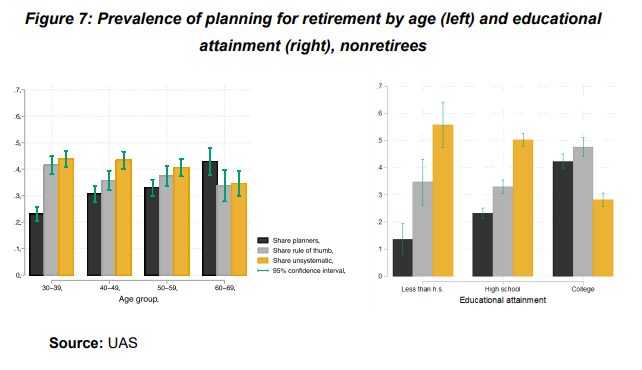 To Avoid This Mistake:  Don’t retire until you have an accurate estimate of your spending requirements throughout retirement.  Here’s how I made ours.  Once you’ve developed realistic spending estimates, determine your projected income through retirement, including an appropriate Safe Withdrawal Rate (here’s how we developed our Retirement Income Plan).  Having a firm grasp on your retirement expenses, and a realistic projection of how your retirement income will cover those expenses, is the one essential piece you MUST have in place before you make your decision to retire.  Don’t retire without understanding these critical elements.

The report’s conclusion is worth a read, so I’ll capture key elements verbatim:

“Our results on retirees corroborate that expectations about retirement are often biased, as retired individuals
reported that on average they had been too optimistic about their retirement benefits.”

“…these biased expectations … can lead, on average, to lower savings for retirement than would be optimal. Moreover, our results indicate that this affects the experience of retirement.”

“A large fraction of retirees express regrets about the choices they made about retirement.”

“If individuals could reduce their uncertainty about future retirement, they would probably have fewer regrets after
retirement.”

Clearly, the need to do appropriate planning for retirement pays tremendous dividends once you’ve entered retirement, and yet only ~30% of retirees report having a detailed retirement plan.   Lacking a plan, many retirees realize, too late, that they had “bad” assumptions and are now facing regrets which will be hard to overcome.

Learn from these common retirement mistakes, and make sure you’ve developed a solid retirement plan prior to finalizing your decision to retire.  If you’re uncomfortable doing it yourself, hire a professional.  This is one area where it pays to hire an expert.

Retirement is one decision that’s too important to make without knowing the facts.

Learn from, and avoid, the common retirement mistakes of others.

Your retirement will be better as a result.

Your Turn:  What other common retirement mistakes do people make?  What tips do you have to help people avoid making mistakes when planning their retirements?  Let’s chat…