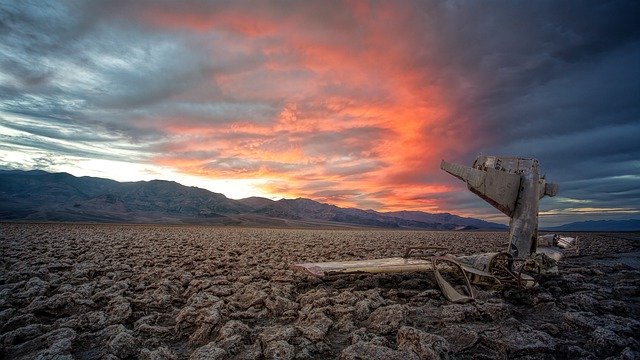 I recently received an email from a long-time reader that started with the following subject line:

Subject: We Are About To Crash Again

The email was basically asking “Is The Stock Market Going To Crash?”, and asked my thoughts on a YouTube video he had just watched which had concerned him.  I watched the video, emailed him my reply, and told him I’d write a post to address his questions in more detail.  This is that post.

Today, we'll watch a Doomsday video and address the issue of whether the stock market is going to crash. Click To Tweet 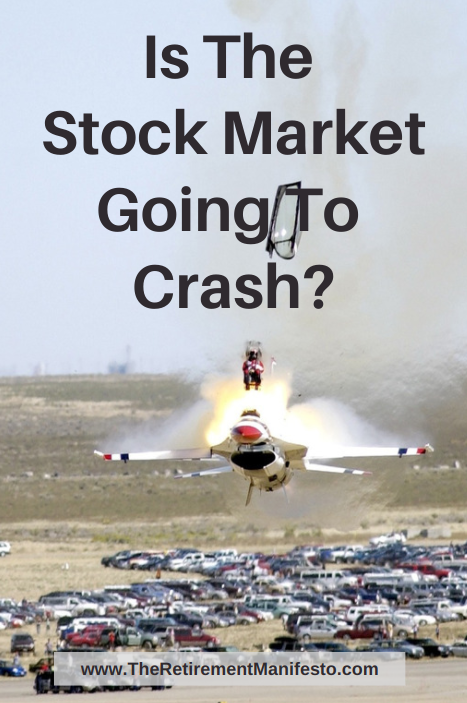 Is The Stock Market Going To Crash?

Retirement has a way of heightening anxiety, and concerns about “Is The Stock Market Going To Crash” seem to increase once the paycheck has stopped.  We’re at the point where we must pay for our living expenses via withdrawals from our portfolios and a stock market crash has the very real potential of impacting our lives.

So, if you’re looking for an executive summary, here it is:

Q:  Is The Stock Market Going To Crash?

There you have it.  No need to read any further.

Glad to see you’re still with me.  Smiles.  The reality is that the market has always crashed, and it always will.  Type “history of stock market crashes” into Google, and you’ll get 10 Million results.  I found this summary from Wikipedia of interest, which shows a list of all the crashes since the 1637 Tulip Mania Bubble.

Regardless, things do seem especially volatile in this crazy year of 2020, so let’s dig a little deeper in our answer to the question “Is the stock market going to crash?”.  My friend’s email was triggered by watching this video (it’s 17 minutes long, so skip to my summary below if you’re short on time):

Summary of the Doomsday Video:

I’m not familiar with George Gammon, but he’s got 121k subscribers so I suspect he’s well known in the space.  I do like his “instructional” style, and his explanations are clear and easily understood.  In summary, his video presents a case that we’re currently in a stock market bubble and explains the various components which support his thesis that a market crash is imminent.  Below, I’ll summarize each of his main points, followed by my thoughts on each:

1) Structure of a Bubble:  George explains the historical stock market pattern of moving through these phases: Stealth (undervalued) to Awareness (coming off the bottom) to Mania (over-valued) to Blow-off (capitulation and despair), summarized below: 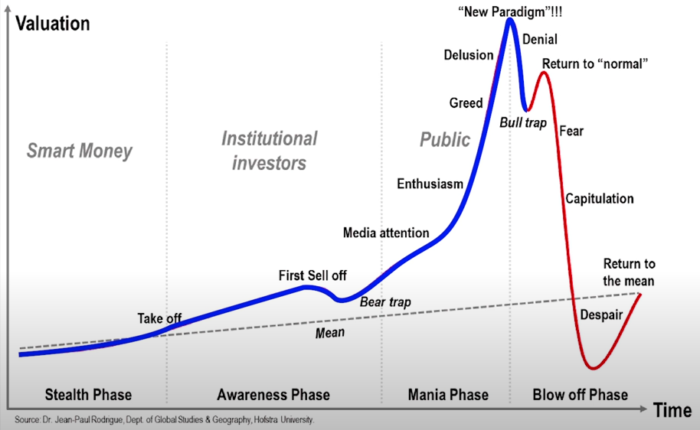 My Thoughts:  While I agree with the general premise of market cycles, I urge caution in trying to “time the market”.  I’ve never met anyone who is successful in combining a “sell at the top” with a “buy at the bottom”.  If you only get one leg right, you’ll have regrets.  Better to have a strategy that doesn’t involve successfully timing the tops and bottoms.

2. Components Of A Bubble: George comments on the following components of a bubble:

a. Leverage/Liquidity:  Today’s market has the highest margin/leverage in history, which George argues is important to understand when trying to answer “Is the stock market going to crash?”.  While I agree with the high leverage, it’s important to understand the implications of today’s historically low-interest rates and their impact on leverage economics.  George fails to discuss this when presenting leverage, which is an oversite in my opinion. Regarding liquidity, George argues that recent Fed stimulus has fueled demand for stocks, as many people invested their stimulus checks into the stock market.  I would argue this isn’t necessarily an indication of a “bubble” since we have no means of knowing how long those investors plan to hold the stocks they purchased. 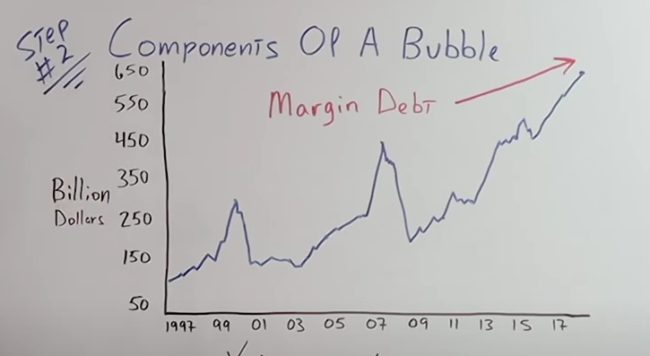 b. Innovation:  George argues that bubbles in the market can develop when people have unrealistic expectations of the impact of innovation on future market conditions. Specifically, he cites 3 areas where innovation is being given too much credit:  1) The Fed’s ability to provide innovative market solutions, 2) excess money printing and 3) electric cars, with specific mention of Tesla being grossly over-valued (I agree with the Tesla view, for the record).

My Thoughts:  If we believe the market is efficient (which I do, for the most part), you could argue that the factors presented above are efficiently priced into the current market.  That said, I do remain skeptical of The Fed’s ability to continue to leverage quantitative easing and debt without detrimental long term effects (specifically, inflation and currency devaluation are two of my bigger concerns).

My Recommended Approach:  I don’t see the points raised in this section as warranting the avoidance of stocks in your asset allocation, as I do have faith that the market will continue to offer the highest potential for long-term returns.  I do believe a wise investor should allocate some portion of their portfolio to “hedge”-type investments, including TIPS (inflation adjust bonds) and precious metals.  I target 10% of my asset allocation to “alternative” investments, which include REITs, precious metals, commodities, and options trading.  I’m also planning on delaying Social Security, primarily as an inflation/longevity hedge.  Having some portion of your assets that could offset future inflation seems to be a reasonable insurance policy in my view.

3. Psychology Of A Market Bubble:   George presents 5 aspects of psychology that are commonplace when the market is experiencing an unsustainable bubble, including:

a) Anchoring:  We tend to use the current market value as an “anchor” for future moves.  If it moves down, we assume it’s undervalued.  If it moves up, we feel it’s expensive.  Our perception is based purely on price, not valuation.

b) Hindsight Bias: We over-emphasize recent performance in our predictions of future performance.

d) Herd Behavior:  We mimic the action of a larger group, which can lead to self-reinforcing cycles of aggregate behavior.  George argues that this is the “core reason why asset bubbles exist”.

e) Overconfidence: We overestimate our intelligence and ability relative to others.

George argues that the combination of these psychological tendencies leads to a majority of people thinking “It’s different this time”, and lead to market corrections hurting the majority of people.  People tend to get lured in at the peak and sell at the bottom, based on these psychological tendencies.  George argues that since “the herd” is currently investing heavily in the market, it’s a warning sign when we’re attempting to answer the question “is the stock market going to crash?”.

My Thoughts:  While I agree with many of the psychological tendencies presented in the video, I don’t agree that they are current indicators that we’re on the cusp of a major crash.  I view the tendencies as fairly generic and ever-present rather than being significantly different than they’ve been over the recent past.

So… Is The Stock Market Going To Crash?

While the video is entertaining to some degree, I wasn’t convinced that the arguments support his conclusion that we’re on the cusp of an inevitable collapse.  That said, I do expect the volatility will continue, and another crash is certainly within the realm of possibility in the coming months.

Then again, a crash is ALWAYS a possibility.  If you can’t handle that risk, you shouldn’t own stocks.

Yes, The Stock Market is going to crash.  Sometime…

What Should I Do About It?

Be careful getting wound up by watching Doomsday Videos, but don’t ignore the very real risk that stocks will go down.  At some point in our retirement stocks will retreat, potentially for years on end.  I’ve written numerous articles on how to position your retirement savings to defend against a bear.

Below, I’ll share my previous articles, along with a summary of their content.  If you’re asking “Is the stock market going to crash” and worrying about what to do about it, the following will give you detailed advice and share what I’m doing to protect our portfolio.  Rather than restate my recommended actions for defending your portfolio against a future bear, I’ll let you decide which post most resonates with you:

It’s normal to ask yourself “Is the stock market going to crash?”.  There are a lot of online personalities who count on those anxieties to drive traffic to their sites.  Avoid the noise, but realize the reality that the stock market WILL crash.  It’s normal, and it will happen again, and again, and again. It’s impossible to predict a market crash, so it pays to be prepared at all times.

Now that we’re retired, a stock market crash has real potential to damage our quality of life.  Having a solid plan is critical prior to your retirement to ensure you avoid the Sequence of Return Risk and avoid being forced to sell stocks during a downturn to fund your lifestyle.  At the same time, to keep up with inflation and cover our retirement expenses, we must achieve the higher returns that stocks have historically offered.

Like most things, the risk of a stock market crash is manageable.  By implementing the suggestions I’ve offered in previous posts, you can sleep well at night in spite of the market’s volatility.

Develop, then implement, your plan.

You’ll sleep better as a result.

Your Turn:  Do you think a market crash is imminent?  What is your opinion of doomsday videos? What tactics do you employ to defend yourself against the bear?