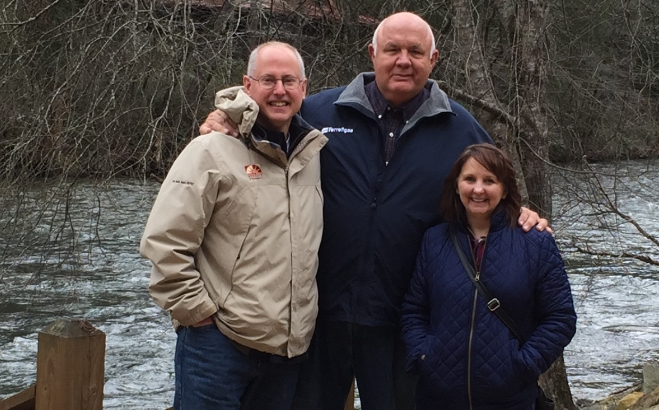 I’m blue as I type this tonight.

I found out an hour ago that a friend of mine just died.  That’s Jim, in the photo above, when he stopped by to visit us last year at our mountain cabin.  We had a wonderful visit, one of many we’ve had over the years with Jim.

Unfortunately, it was our last.

At 7:37 pm on a recent evening,  Jim sent me an email from his home in Guatemala.  He went to bed shortly after he hit “send”, and he never woke up.

The final sentence in his email is below:

HEY Fritz, I am attaching a document written by a famous Dallas Seminary prof thinking it might trigger some ideas for you to use in your “Retirement Manifesto.”

Those are the final words I’ll ever receive from my friend.  As I thought about that email while writing this post, I realized something.  It wasn’t the final words that mattered, it was the symbolism which they represent.  I’ll explain more at the end of this post.  It’s important.

The relationship.  We’ve known Jim since 1992 (25 years!) and he’s been a part of our lives for decades. He knew us before our daughter was born (she’s now 22, and married). We’ve known Jim longer than we’ve known our own daughter.  We first met Jim & Cheryl on a Sunday morning in the Spring of 1992, when we visited a small non-denominational church in Ohio.  A few weeks later, they had us over for lunch.  We were hooked, and we’ve been friends ever since.  The laughs we’ve shared with them over the years will always be special memories. 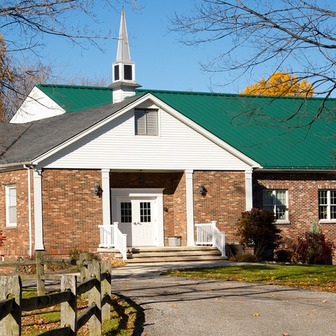 Jim and his wife, Cheryl, had recently moved back to the USA after years of missionary work in Latin America.  They made the move for their children’s’ educational needs, putting their personal dreams on hold for the sake of their children.  It was the first of many selfless acts we witnessed in Jim’s life.

I remember when we were new parents in 1994, and he encouraged us to take time for each other, and not let our role as parents dominate our relationship.  “Your child will someday leave the nest”, he said, “and it’s important that you’ve continued to foster your relationship with each other as husband and wife.  Many folks wake up in an empty nest and realize they’ve grown apart. Don’t let that happen to you.  Carve out time for date nights. Be intentional.”

Don't wake up in an empty nest and realize you've grown apart. Be intentional. Click To Tweet

Before we left Ohio in 1998, Jim & Cheryl were back “in the field”, and have spent the last 20 years doing the missionary work that is their Passion. They’ve been moving around Latin America, and we’ve kept in touch with them on a regular basis through the years.  We consider them both to be true friends, a valuable commodity that’s getting rarer in today’s culture.  We’re truly fortunate to be among the thousands of people they’ve impacted with their lives. 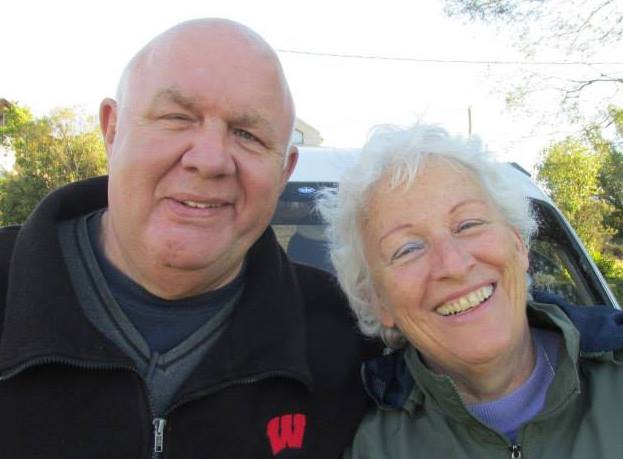 In Honor Of Jim

Today, I write this post in Jim’s honor.  He was an amazing man, and he’s made a huge impact in the life of my family.

As I would expect from Jim, the document he attached in that final e-mail was a good one.  But as you’ll find out, that’s not the important point of today’s post. There’s a bigger message here than the article he sent me.  I’ll get to that.  I wish he were still here to see this post.  I hope somehow he’s aware of the words I’m now typing and knows what a positive impact he’s had on our lives.

I want to share something with Jim.  His main reason for sending that final e-mail was to congratulate us on our daughter’s wedding.   The attached article was a closing thought, but the bigger point was about the wedding.

Unfortunately, I wasn’t able to send him a wedding picture before he passed away, so I’ve included one of my favorite pictures below for Jim to enjoy.  I hope, somehow, he’s able to see it.

Thanks, Jim, for your role in creating an incredible relationship with our daughter.

You’d be proud of her, and what she’s become.

Preparing For Retirement – 8 Questions To Ask

The article Jim sent to me was titled “Preparing For Retirement”, written by Ken Royer.  Below, I’m going to summarize the key points of the article and add my thoughts on the concepts presented. I’m doing this for Jim, but it’s going to be brief.  The article isn’t the important point of this post.  (See “In Closing” for what really matters).

Below, I’ve summarized the article received from Jim.  Ken begins his article by presenting his purpose, which is primarily to help prepare someone who is approaching retirement.  He then enters into the essence of his article, which is the following 8 Questions one should ask as they Prepare For Retirement;

If you enjoy your work and continue to be productive, is it necessary to retire?  Don’t assume retirement is mandatory.  If you’re doing work you enjoy and you feel a calling to stay engaged in your work, consider staying.

I like that thought, and encourage everyone to decide for themselves if retirement is right for them.  There’s a reason it’s called “Personal” Finance, after all!

Q2:  How can your wisdom be passed on as a legacy?

Face it, by the time you retire you’re likely an “expert” in your field.  Be intentional in passing your wisdom down to the next generation.  “The older sharing with the younger”.  An important concept, too often lost in today’s fast paced society.

Q3:  How can you utilize your wisdom without being a threat?

As you leave the workplace, it’s time for the younger generation to fill your shoes.  How do you support them as they step into decision making positions, without having your experience be a threat?  Get this right, it’s important that your “vast storehouse of experience and wisdom” be used for long term benefit by those left behind.

Q4:  How can you continue to bear fruit after retirement?

Just because you’ve left your job doesn’t mean you can’t continue to impact the world for good.  Ken shares the story of a 98-year-old who is still making an impact. What’s your impact going to be?

Q5:  How will you stay active after retirement?

Ken reminds us that “retiring to the rocking chair” isn’t the best path to a succesful retirement.  Rather, he cites studies that show our physical and mental health are strongly enhanced if one stays productively active.

This question makes me think of the book I recently read, Younger Next Year, which has motivated me to focus on physical fitness as a high priority in my retirement.

Q6:  How can you structure your life for fruit-bearing even after Age 65?

What spiritual and natural gifts do you have?  What hobbies intrigue you?  Think about ways to use your gifts and hobbies in a way that bring you joy, and bear fruit later in your life.

Q7:  What are our financial resources?

It was interesting to me that Ken didn’t ask this question until he asked 6 other questions.  To me, it highlights his recognition that money, while often one of the first things folks think about when they’re considering retirement, is actually not as important as other aspects of your life.

Thanks, Jim, for sharing this Wisdom on what’s really important.  That’s the biggest lesson I got out of this article.

How can you continually learn from others, asking questions in a way that engages your mind? How can you continue to read, discuss ideas, keep up with the world news, and be involved in the interests of your grandchildren?

It was a good article, but as you’ll see below, that’s not what this post is about.

This post is about Jim.  And with that, let me reveal something which you’ve probably figured out by now.

My real purpose for writing this post is the section below.

In Closing:  The Final Words Of A Dying Man 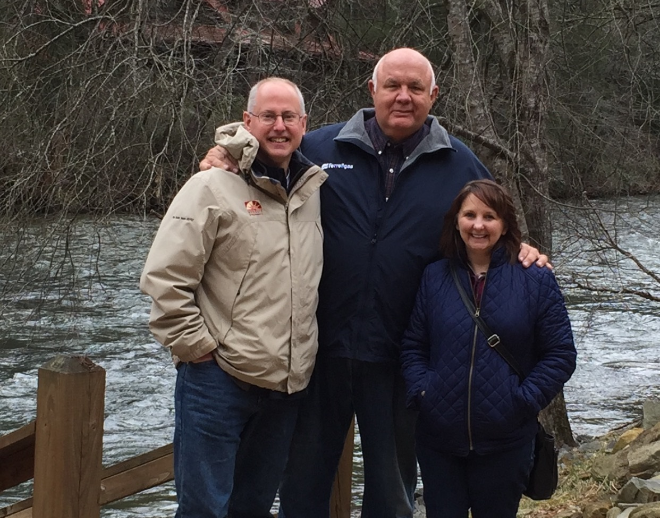 As I thought about Jim and the email he sent me, I realized the Final Words he sent weren’t about the article at all.  I wrote that review as a show of respect to Jim.  He deserves that.

But his Final Words were about so much more.

“…thinking it might trigger some ideas for you”.  The Final Words.

The Final Words Of a Dying Man reveal his character of generosity, selflessness and genuine human caring. He was “thinking it might trigger some ideas for you“.  He was thinking about ME. He was ALWAYS thinking of others.

He was always thinking about YOU.

It doesn't matter what that final email said. It's The Act Itself that speaks loudest. Click To Tweet

Throughout the 25 years I’ve known Jim, I’ve noticed a special quality about him.  He really cared about YOU, and made you feel like you were the most important person in the room.  He asked sincere questions, and he offered heartfelt fatherly advice.  He listened, intently. He was sincere, principled and a man of integrity.

As he demonstrated once again in his Final Words:

Selflessness is a rare commodity these days.