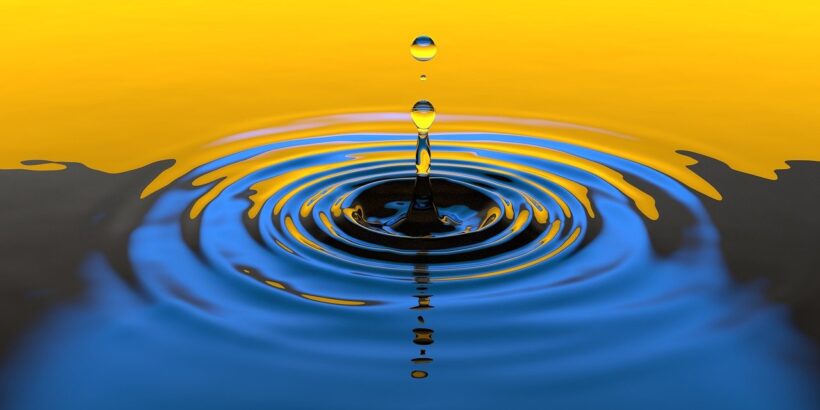 In the seven years since, he’s thrown hundreds of pebbles into that pond. The ripples have gotten bigger, and more people have noticed.

Today, the story of the man, the pebbles, and the ripples.

A story that directly affects you. 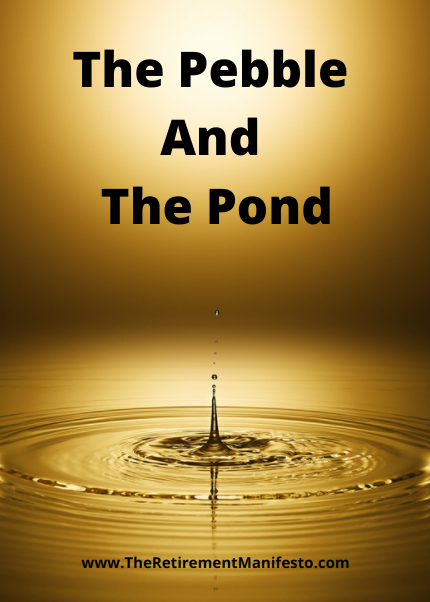 The Pebble And The Pond

How long do ripples last?  Is it feasible to throw pebbles into a pond, one after the other, with the hope that the ripples will never stop?  An interesting question, this issue of pebbles, ripples, and ponds…

Initially, I considered writing this entire post as a metaphor, leaving the reader to figure out the meaning.  I changed course, and have decided to write a brief explanation before continuing with the metaphor.   I’ve thought a lot about this story.  It has a lot of meaning to me, and I hope it will impact you as well.

We all choose the pebbles we throw.

Our best hope is that their ripples will make an impact.

Now, back to the story… 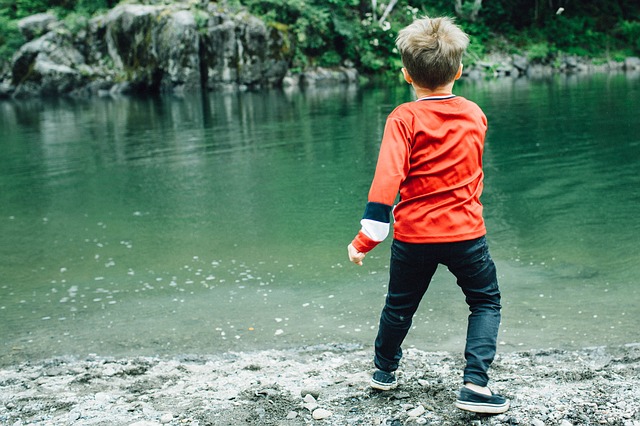 The Act of Throwing Pebbles

The man chose not to get frustrated by the lack of impact from those first few pebbles, nor by the fact that no one besides his family and a few friends seemed to notice.  Rather, he continued to gather pebbles.  Dutifully, he continued to throw them into the pond.

Week after week.  Month after month.  Year after year.

Today marks the 367th pebble he’s thrown into the pond.

The pebbles remained essentially the same size, but the ripples grew larger.  Sometimes, he got lucky and a pebble would skip across the water, creating multiple ripples from a single stone.  As the ripples grew, so did the people who started to feel the impact.

Over 12,000 people have signed up for emails to get notified when a new pebble gets thrown, and he’s heard from folks all over the world who have been moved by those ripples.  He imagines a basketball arena full of folks watching those ripples, and still feels humbled and in awe.

He’s heard from folks swimming in the pond who have looked at every pebble he’s thrown.  (To those rare readers who have read every one of my posts, my utmost appreciation).

In early 2020, he threw a giant boulder into the pond, and the ripples continue to this day.

He’s pleased his pebbles are making a difference.

How Long Can Those Ripples Last?

After 7 years of throwing pebbles, the man’s pace has slowed.

For the first 6 years, he threw a pebble every week. In the first 3 months of this year, he’s thrown only five. He’s realized he’s free to decide when to throw pebbles, and when to pursue his various other interests.  It was a difficult decision, this forgoing of the weekly pebble throwing, but he’s glad he made it.  He has no obligation to throw a pebble every week, and the pond seems to do quite well, thank you, without the weekly disruption.

While he still enjoys throwing pebbles, he suspects he’ll throw them less frequently as time moves on.  He hopes the pebbles he chooses to throw continue to make big ripples.  He enjoys knowing his effort makes a positive impact on the pond.

He still has a pile of pebbles at his feet, but he’s becoming more selective on which he chooses to polish.  He’s learning to take more time with those pebbles before he launches them, it seems to have a positive impact on the ripple they make.  With all of the “easy pickings” already thrown, it’s becoming more difficult to find the good rocks.  Yes, he has some pebbles left, but they don’t fill him with the same excitement those earlier stones did.

As finding pebbles becomes more difficult,  he’s finding other things that he’s currently enjoying.  Retirement is an interesting evolution, constantly seeking out new things which offer fulfillment in your hard-earned time.  He recently built a mobile wood storage cart for a new wood storage shed that’s being delivered in a few weeks.  He shared his latest project on his Instagram account (feel free to follow if you’d like to see what he does when he’s not throwing pebbles):

Earlier this week, he took a two-day hike on the Appalachian Trail with a friend.  Hmmm…there’s a potential pebble worth polishing.  He wonders if it would make any ripples, and adds it to the pile by his feet:

The Impact of a Ripple

The man has heard from many that they appreciate the ripples he creates, and he enjoys the positive feedback.  Many folks claim the pebbles are making a difference in their lives.  Oh, if we could all be so lucky.

The joy of making an impact for good.

There are few things in life as rewarding as knowing the work you do makes a positive impact in the lives of others. I suspect there are many who only casually watch the ripples roll toward the distant shore.  Some, however, embrace the ripple.  I’ve received thousands of emails from you, the reader, telling me of the impact my pebbles have made.

The changes they’ve led to in your lives.

“Helping People Achieve A Great Retirement” has been the man’s Purpose for years, and he hopes the pebbles he’s thrown thus far make a lasting impact.  He’s pleased that he’s captured every pebble thrown for the benefit of those who are following behind him on their journey.

He hopes the legacy of those pebbles already thrown continues to produce ripples for years to come.

And yet, how long can one throw rocks into a pond?

Many folks wonder where the man continues to find new pebbles.  He strives to find a new pebble every time he decides to throw one into the pond.  Sure, there are some “favorite pebbles” that seem to resonate.  But he’s already been there, done that.  It’s much more rewarding to search for new pebbles for every throw.

His most frequent source of inspiration is his daily walk in the woods with his dogs. As he walks, he picks up the pebble, places it in the pocket of his mind and carries it with him for future polishing. Inside secret: He also sends himself emails via voice typing while walking when a particularly attractive pebble appears on the trail. In fact, he took the following photo just this morning, as the thought of “The Pebble And The Pond” first entered his mind:

And yet, whereas this walking time was once dedicated to searching for pebbles, he’s finding his mind thinking about other things as he watches the sunrise over the Appalachian Mountains on those morning walks. What to pack for that hiking trip with a buddy on the Appalachian Trail.   How to solve that tricky slope on the next Freedom For Fido fence build.  How to organize his new wood storage shed.

He and his wife are making a difference in the lives of low-income folks who live nearby, and he’s finding it rewarding to make an impact alongside the one he loves.  He’s creating new things in his woodworking shop, and it brings a smile of contentment.  He’s spending time with his granddaughter and impacting a future generation for good.  All good things, and all competing with that rarest of all commodities.

The ever-fading element that can never be replaced.  The man is being selective in how he utilizes that time.  Is it best to continue throwing pebbles, or to grow other pursuits that can also make an impact?  He chooses to do both, knowing full well that both are negatively impacted by his intentional diversion of focus.  Life seems more fun to the man when he’s working on various passion projects at the same time.

As the man becomes more selective in finding pebbles to polish, one of his biggest thoughts is on the pond.  He’s done his best to explain his thinking.

He hopes the pond will understand.

The Retirement Manifesto turns seven years old on April 12.  I never thought we’d make it this far (or grow this big), and I’m enjoying the ride.  Like everything in life, things evolve as we age.  It’s no different with a blog.  Instead of the “traditional birthday post” I’ve done in the past, I decided to mix it up today.  To share some deeper thoughts in a creative way as we enter our 8th year together.  You deserve that, as a small token of my appreciation for your loyalty.  I hope you enjoyed the approach.

I love throwing pebbles.  There’s an innate satisfaction when I find a particularly interesting pebble and spend time polishing it to a shine. I love knowing the ripples are making a positive impact on the pond.

And yet, I know there are other things I want to pursue.  Life is all about balance, and I think about it often.

I hope my words have encouraged each of you to search for your own pebbles to throw.

Find a way to make a few ripples.