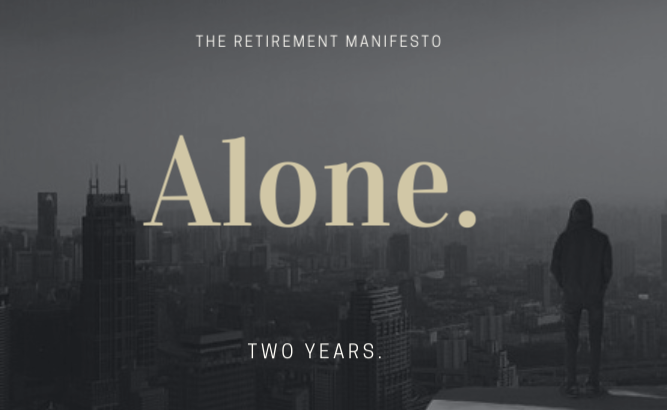 I’ve Been Alone For Two Years.

Two years ago my wife and I Sold our City House in 7 days, then used Craigslist to Sell 30 years of stuff in 24 hours and moved to our retirement cabin in the North Georgia Mountains.  Downsizing move complete!!

Only one problem:  I still had to work.  In The City.

Due to a nursing home situation with my mother-in-law (Alzheimer’s), we moved 2 years earlier than we’d originally planned. Today, the story of what we’ve learned since the move.  Two years with plenty of time to think.

Two years of being Alone.

The path has led to a lot of “Alone” time, for both my wife and I.  We’ve both learned from it, and we believe in hindsight we made the right decision for our circumstances.  Everything in Life comes with pros and cons.  Deal with it, and focus on the positives.

Some background:  Our mountain cabin is too far from my office to commute (~2 1/2 hours, each way), and my employer doesn’t allow telecommuting (I sneak in Friday’s from home.  Our secret, ok?).  We realized we had no real choice but to get a small City Apartment for the weeknights while I still had to be in the office.  We’d make it work.

“Retirement In Only 2 Years” became our mantra.

We made a mutual commitment for two years, even though neither of us cared for it much.  The HUGE “Pro”:  We live together in the mountains each weekend, and it’s made the Alone time during the weeknights a burden we could bear.

At least we were living our Retirement Dream every weekend, and the retirement countdown had begun. Click To Tweet

We Had Achieved A Milestone

With the completion of our downsizing move, we’d achieved a major milestone in our retirement journey.  Now, it was now only a matter of time until I retired.  The countdown had begun.

“Retirement In Only 2 Years”

But that Milestone also led to two years of being Alone.

For the past 26 months, I’ve spent 3 nights a week, Alone.   I realize many folks spend more time “Alone” than that, but I can only write about my experience.  One thing I’ve learned is deep empathy for folks who are Alone but not by choice, and I hope you can learn from our experience even though it may be less intense than what you’re going through.

Our typical weekly routine is as follows:

After work on Mon-Wed, I walk the two blocks to my City Apartment and my wife hangs out at the cabin with the dogs.  3 nights in The City X 6 hours per night and the math is clear.

My wife and I tend to think about the split between City/Cabin nights as a teeter-totter, with our 4 nights in the cabin tilting the board in favor vs. the 3 nights in the City.   We’ve Got This.  We’re balancing it the best we can, and it’s worked reasonably well. 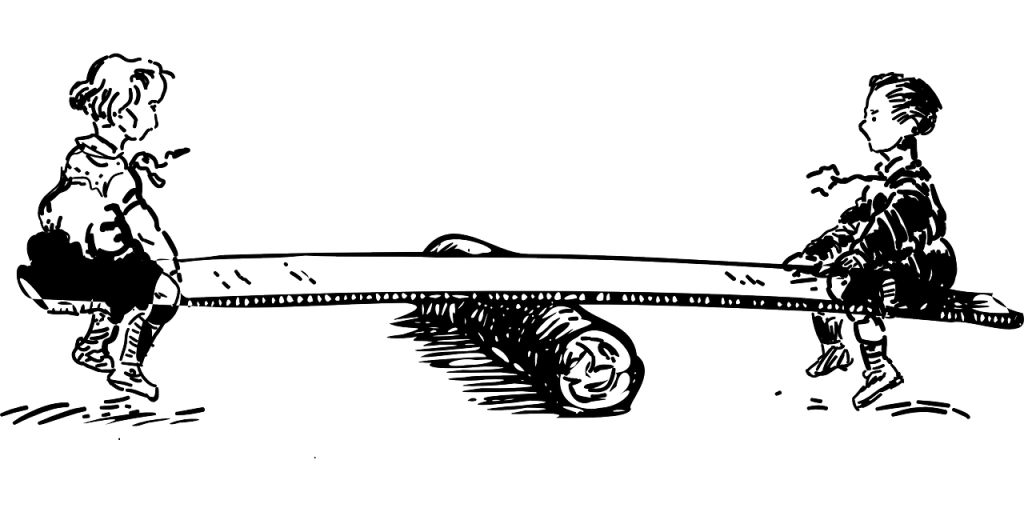 But we’re ready for it to be over.

We’ve endured, but we’re looking forward to ending this “forced isolation” in our lives.  It’s been a sacrifice we knew we had to make, and we’ve made it.

The Good News:   My Apartment Lease Expires on June 3.

Retirement is only 45 days away. 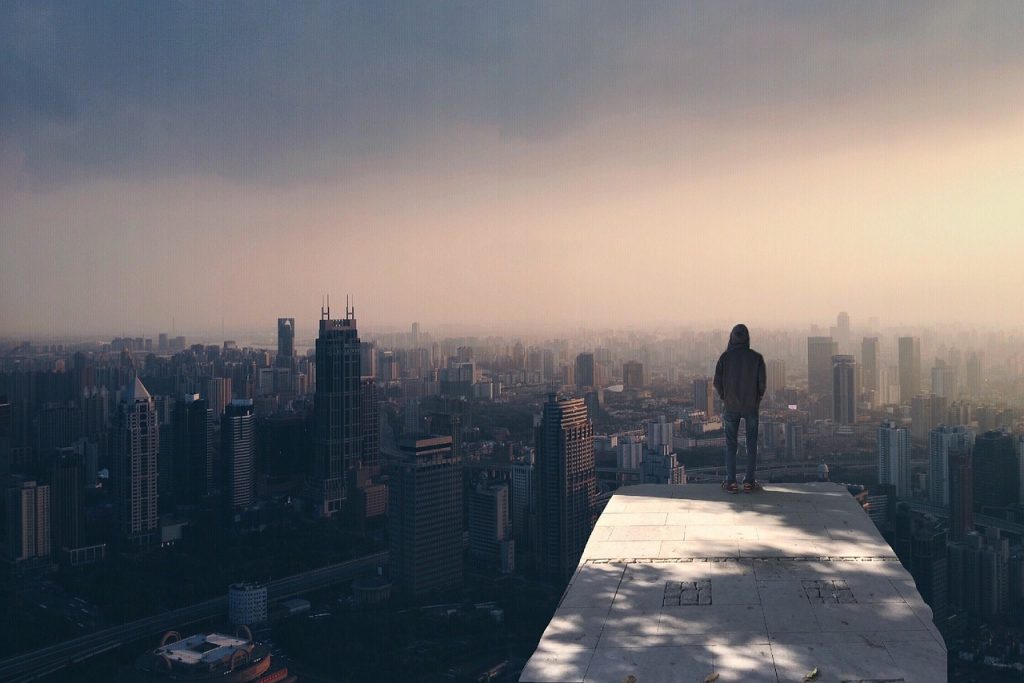 Since this period of isolation is ending, it seems a good time to write about the experience of being Alone.  What do you learn while spending two years in isolation?  I’ve thought about it as I prepared for this post, and there are some things I’ve learned which are worth sharing.

More transparency than usual, perhaps, but it’s where the mood leads as I write these words at my trusted Apartment table, so I follow.  I hope you appreciate the heartfelt words as I write about the experience.

An Aside:  As my long-time readers know, I tend to alternate between “Hard” and “Soft” topics in my posts.  I’ve realized during my journey the importance of both. Patience, please, if you prefer the “hard” stuff, more of that coming soon.  In the end, it’s all about balance. Money matters, but it’s far from the most important thing in life.

The Reality Of Being Alone

As I work on this post, I’ve realized that for the majority of those 18 hours/week of being Alone, I’ve been sitting at the table shown above.  Writing.  Thinking.  Then writing some more.  I wrote yesterday.

I’m sitting at that table as I type these words.  I’m currently in the 17th of my 18 Hours of “Alone” this week, and I just took that self-portrait photograph.  I’m typing on the Chromebook at the table at this very moment.  That desk lamp is still on, and my shadow is still on that wall.

Since moving into the apartment, I’ve written over 100,000 words on this blog.  95% of those words have been written from that table.  I’ve spent over 600 hours sitting at this table, writing.

That table and The Retirement Manifesto are two of the things which have kept me sane. Click To Tweet

Knowing in advance that we were heading to this lifestyle, we had time to prepare.   I thought about what I was going to do with all of that time, and I made a decision.  Since the “Alone” time was unavoidable, I wanted to use it in the most productive means possible, so I’ve focused on:

I decided in advance that I would find a way to apply a Purpose to this time, and it’s served me well.

Lesson #1: If possible, plan in advance to put your Alone time to work for a real Purpose. Click To Tweet

What Do I Do When I’m Alone?

I’m shockingly busy, and it’s all good, value-added activity.  It challenges me physically, mentally and artistically.  I’ve started working with photography, and enjoy experimenting with various photo editing platforms.  Developing my photographic/artistic side has been an interesting challenge.  It’s kept me busy, and it’s kept my focus off being Alone.

Lessons Learned From Being Alone

In addition to the importance of keeping yourself busy,  I’ve learned some other things.

My wife’s learned a lot, too.  Obviously, I can only write from my perspective, but we’ve talked about being Alone, and our experiences over the past two years.  We talked about this post tonight and shared a lot of the same opinions about the importance of staying busy, and how it makes being Alone more tolerable.  She’s learned a lot of the same lessons that I have.

She’s found that she loves pottery, probably as much as I love writing.  For the record, she’s better at pottery than I am with the written word.  We’ve both found things we love, and it’s helped us deal with being Alone.

As a wrap-up to this post, an update on my Apartment move-out plan.  My last night in the apartment will be May 31. I realized this week that I’m only going to spend 7 more nights in my apartment.

I’m traveling a lot during the final weeks of my career, teaching my successor the ropes.

I just packed my truck with the first load to haul back to the cabin, and I started selling stuff we don’t need.  I’m feeling the excitement of making my final move to our retirement cabin.  I only have three more trips from Atlanta to the mountains to move my stuff. 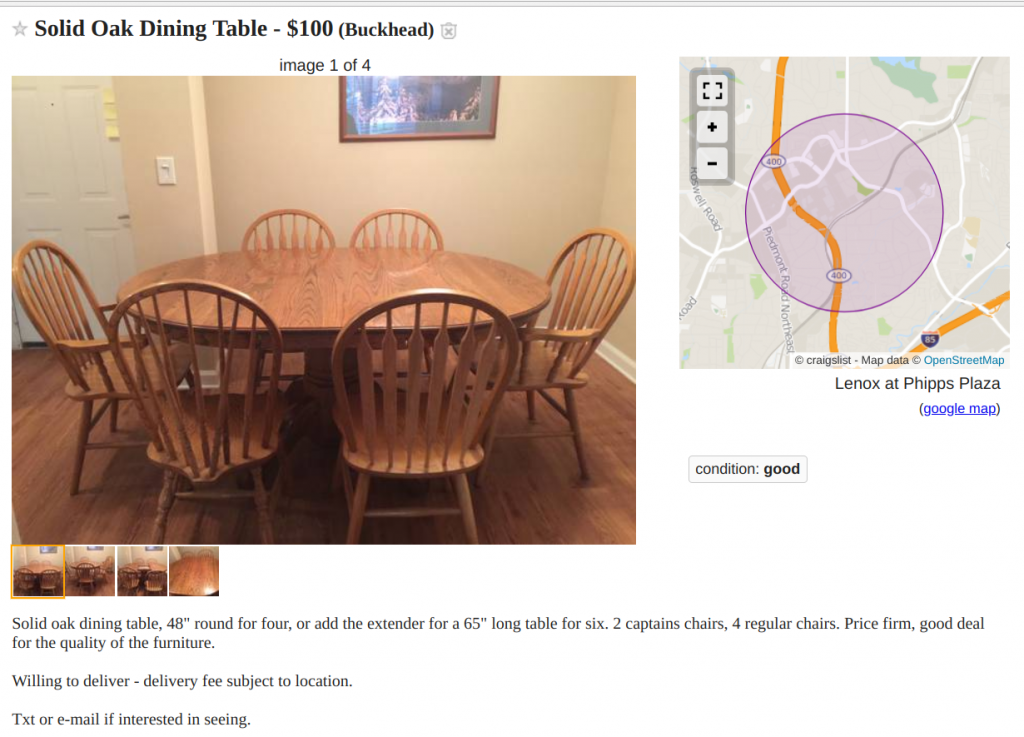 The table that’s been the Headquarters Of The Retirement Manifesto for the past two years is gone.

I started this post on that table, but I didn’t finish it there.  Instead, I finished it on a lap desk while seated in my recliner (this lap desk is going to take some getting used to).  The table is gone. It was picked up by a nice guy yesterday named Scott after he saw the above ad on Craigslist.  I helped him load it on his trailer.  He wasn’t in a hurry, and we had a nice chat.  He congratulated me on my retirement.

Turns out he’s moving to the mountains, just 20 miles from our retirement cabin, and he’s taking my table with him.   I’ve got his card, may call him sometime.

I don’t like being Alone.  Sometimes in Life, we have to choose a short-term sacrifice to achieve a longer-term goal.  If you’re facing a sacrifice, make sure the longer gain is worth the short-term pain.  Then, decide in advance how you’ll minimize the disadvantages of the short-term situation, and get on with it.

Find a Purpose, and set some Challenges for yourself to achieve new things.  Be intentional with your mindset. Fill your time with things that motivate you.  Set some goals.  Focus on Relationships.  Take time to think.

Develop your artistic side.

I’ve learned a lot by being Alone over these past 2 years.  Most importantly, I’ve learned that the mindset you adopt is important as you face challenges during your journey.  No one has a perfect life.  Make the best decision you can for your situation, then determine to make the best of it.  Focus your mind on the Positives, not the Negatives.

Being Alone doesn’t need to mean being Lonely.  Still, I’m happy than in a few short weeks I’ll no longer be Alone.  I’ll be with my wife, and she with me.  We’ve made the sacrifice, and it’s time to achieve the longer-term benefits in our early retirement.  Retirement is only 45 days away.

In your life, find a way to minimize the pain of short-term sacrifices you make to achieve your longer-term goals.

Even if you find yourself Alone.

Your Retirement, And Your Life, Will Be Better For It.

For The Comments:  What sacrifices have you had to make in your life for longer-term gain, and what steps did you take to minimize the pain?   Are there ways that the lessons I learned while being Alone can be applied to other sacrifices taken during life?   Your thoughts, please?  Let’s chat…..