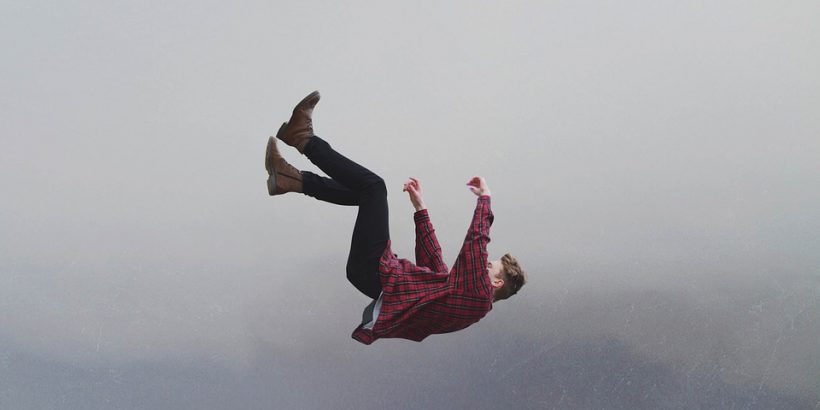 Is it possible to go too far in pursuing “Financial Independence”?

Absolutely.  I’m living proof, and happy about that fact.  I’m happy because being “Living Proof” certainly beats being “Dead Proof.”  I should know.

I could have died.

How The Pursuit of Financial Independence Almost Ended My Life

Have you ever done anything stupid?

I suspect most have done something stupid at some point in our lives.

What were you thinking?

Think back to a time you did something which you realized you shouldn’t be doing.  What were you thinking? In my case a few weeks ago, I brushed off the danger.  I knew there was SOME danger, but I minimized it in my mind.  After all, those gutters at our new “Great Cabin” just HAD to be cleaned, and my ladder wasn’t long enough to reach.  Seemed obvious to me, just go up on the roof.  I could always use my pressure washer to keep me from getting too close to the edge.  Gotta be safe, after all!

What could possibly go wrong?

I suspect, with no hard evidence to support the thesis, that the “risk of oversite” is worse within the “Financial Independence” community than the population at large. Sometimes, I suspect, we take unnecessary risks to avoid spending money.  After all, it’s easy to quantify the cost of hiring someone, and we’d prefer to use that money toward our Financial Independence.  Unfortunately, it’s also easy to under-estimate the risks we expose ourselves to in our quest to save money.

What Have You Done To Save Money?

Think of something you’ve done to save money which exposed you to risk.  Have you done something which, in hindsight, you realized you should have hired someone to do. Something that was dangerous, but you justified doing it yourself.  I know I have. Hiring stuff out is a hassle.  It costs money.  And, it’s inconvenient.

Do It Yourself!  Git ‘Er Done!

We’re “Do It Yourselfers” on the path to Financial Independence!!  We don’t pay for this stuff!  But…

There are times when we need to slow down and think things through.  We’re getting older…that risk/reward equation needs to be modified.  The bar gets lower with age.

A good friend/mentor/previous boss of mine, who I respect beyond words, shared the following wisdom with me when he heard about my Fall.  He’s been sharing wisdom with me as a mentor since 1988, and I deeply respect his opinion. He’s given me permission to share his advice with you today.  Listen to his wisdom, he’s a wise man who thinks deeply. My wife and I are attending his birthday celebration in a few weeks, after being fortunate to visit with him just a few weeks ago at a Scottish Highland Festival, where he was enjoying his Scottish heritage in a classic kilt, along with his charming wife.  He’s quite the character, and his wisdom is worth sharing with you:

And, I should mention:  He’s only a month short of his 80th birthday.

The bar gets lower with age.  Learn that lesson, and spend some money to reduce your risks.  You’ve got enough at this point in your life, and your future life isn’t worth the small dollar savings.

Is your life worth risking for a few dollars? Mine's not, so why'd I do it? Learn from my mistake. Click To Tweet

Don’t Get On The Roof

My entire life I’ve loved getting on the roof.  I remember as a child getting on the roof of the neighbor’s barn (Sorry, Dad, hate to break it to you in a post, but I climbed on The Martin’s barn roof, many times when I was 10-16 years old.  Surprise!!  Then again, you probably already knew that….).   We’re invincible, right? Through my 20’s, 30’s and 40’s, periodic tasks would call for me to climb on the roof.

No problem. There’s nothing too concerning about getting on the roof, in spite of what my wife says (smart lady, that one.  I should listen to her more often…but we digress).  Just watch your footing and be careful. Right?

After all, accessing those gutters from the roof when your ladder won’t reach just makes sense.

Except when it doesn’t.

I just didn’t recognize it.  I didn’t take the time to honestly evaluate the risks.  I’m older now, and it pains me to admit I’m a bit less athletic than I was in my 20’s (though I’m working hard to get Younger Next Year.)  Anyway, I had a bit of free time, and the gutters were the next task on my “To Do” list.  I don’t ever hire this stuff out.  I’m a “Do It Yourselfer”.

I’m pursuing Financial Independence.  Why would I pay somebody to do something simple?

I underestimated the risk.  I justified it.

It almost killed me.

(If you think I’m exaggerating, realize 340 workers die each year from falls of less than 20 feet)

A contractor we hired to fix a few things on our Great Cabin warned me a month ago about how pollen makes a metal roof slick.

I Should Have Listened…

I went on the roof.

Falling Off The Roof

It happened suddenly.  Without warning.

One minute, I was inching my way carefully down to work on the next prime target of pine straw stuck in the gutter. The next minute, I was on my butt, sliding at the speed of light toward the edge.

In an instant, I was airborne.  I couldn’t stop myself.  A simple…

Something indecipherable came out of my mouth as I slid toward, and over, the edge.  My wife heard it. She was right below me, on the deck.  She watched me as I flew overhead.

They don’t teach you how to prepare for this in school.  In the 0.5 seconds it took from launch to landing, my mind was racing…..”How do I land this thing?”

Instinct, really. Though at the time it all appeared to happen in slow motion, there was surprisingly little time to think.  I realized I was airborne, and evaluated my options.  None obvious.  And none good.

I hit the ground.

I hit the ground hard when I fell off the roof. I'm lucky I wasn't killed. Click To Tweet

I kinda sorta tucked and rolled.  My glasses went flying.  My forehead was bruised from the poorly executed “head plant into pine staw bedding” which resulted from the implementation of the previously determined strategy to “Tuck & Roll”.  I got the tuck part down pat, but the roll was ugly.

I remember looking toward the unfocused sky, and realizing I was ok.

I just wasn’t sure where my glasses were.

“I’m OK”, I called to my wife.  In a near state of panic, she disregarded my shout of safety and came sprinting around the deck to my landing area below.

I didn’t want to move until my wife found my glasses, but other than that I was fine.  Really.  Surprisingly. Miraculously.

I was fortunate to avoid any injury from my fall.   It could have entirely changed my life (and NOT for the better). I posted the following on Facebook a few hours later, but before I’d had time to really think through the implications of my fall: 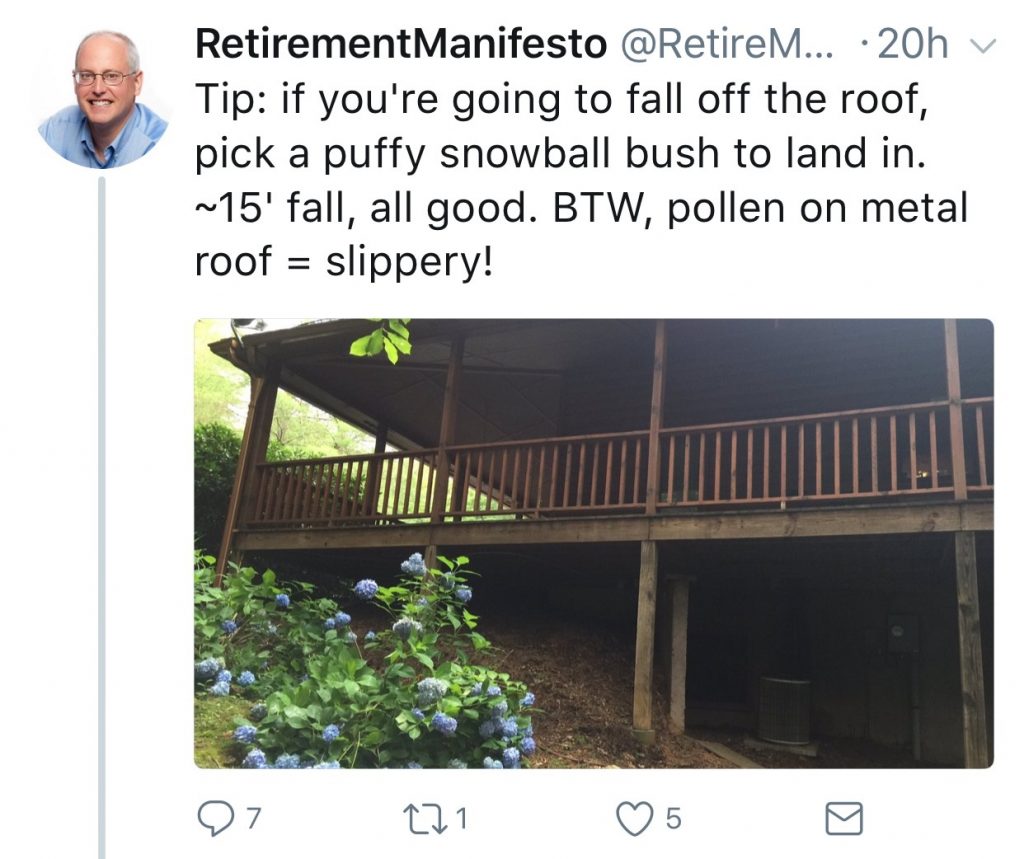 In the ~15 days that have passed since “The Fall”, I thought a lot about what could have been.  About this post. About the lesson I learned, which I’m putting into the written word at this exact moment on my handy little Toshiba Chromebook (BTW, I love Chromebooks!  If you haven’t tried one yet, spend the $200 and give it a go.  They’re great!)

What Could Have Been

I’ve been thinking about what could have been, and thankful that things turned out the way they did.

Life is scary.  Your entire path in life can change SO quickly.  So permanently.  I could have experienced a….

I’ve thought a lot about the dreams my wife and I have for retirement, and how we thought the next few years would unfold.  We’d camp 6 months in our 5th wheel.  We’d hike.  We’d kayak.  We’d swim.

It could have been the end of our dreams.

How The Pursuit of F.I. Almost Ended My Life

Am I being Melodramatic with the title of this post?  I think not.  If you define “Life” as the plans you have for the next 5-10 years of your time on this earth, it’s certain that those plans could have ended.

Our life as we’d planned it.

Had I not landed so well, things could have ended much differently, and much worse.  Consider, for example, this Twitter response to The Fall from my friend, Vicki, over at Make Smarter Decisions: 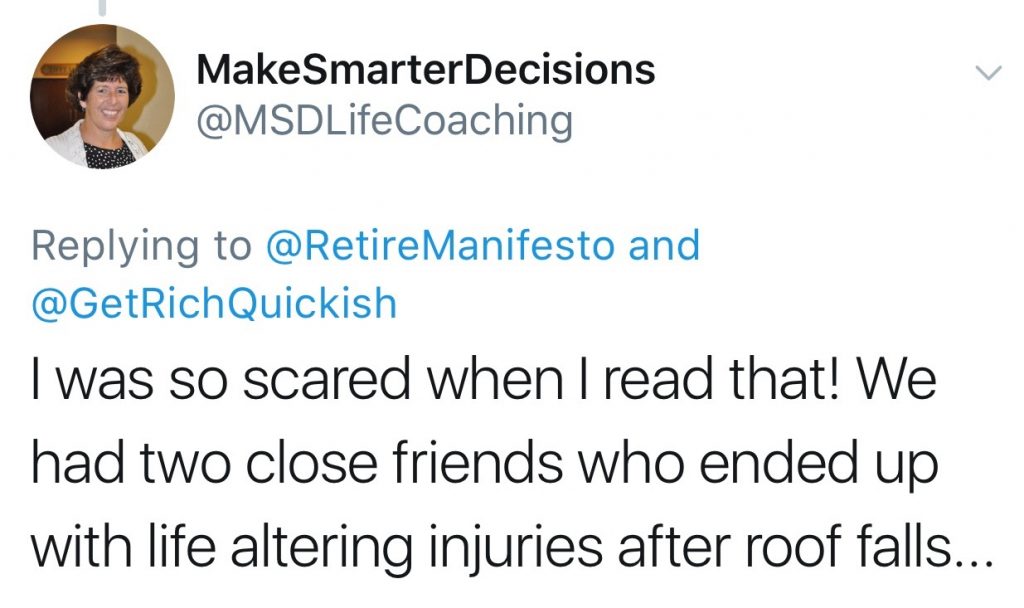 Bottom Line:  I don’t think I am being melodramatic with that hopelessly enticing title.  It’s true.  My life could have ended.  Literally.

Realize that your life can change in an instant.  Acknowledge the realities of your aging process, and don’t assume you can still do the same things you’ve been able to do all of your life.  Learn from my mistake.

Do what I didn’t do, listen.

The next time you’re considering doing something that you know could change your life if it doesn’t go according to plan, stop for a minute and think.  Think about this post, and how your life could change if things “went South”.  Consider the cost of having it hired out, and compare that to a “life altering injury”.

Then, hire someone to go up on that roof.