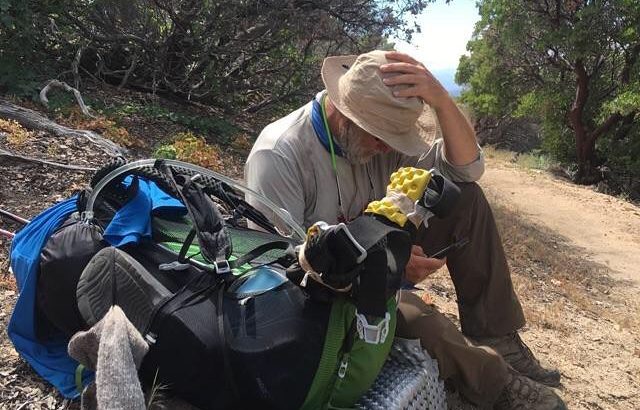 Several of you have asked about my friend, Kirk.  You may recall this article he wrote about his early retirement and his plan to hike The Pacific Crest Trail (2650 miles from Mexico to Canada) this summer.  He launched, as planned, on April 22 with the goal of reaching Canada in September.

Now 7 months into retirement, he’s had to face the reality that sometimes our plans don’t work out the way we thought they would.  He’s recovered, and has a valuable lesson for all of us on the value of being prepared with a “Plan B”. In early May 2016, I was 6 months into my early retirement,  and 400 miles into a 2,600 mile journey on the Pacific Crest Trail.  Then, the unexpected happened.

And my Plan B doesn’t exist!

My Original “Plan A”

I had worked so diligently for so long at paying off all my debt and building a comfortable investment portfolio, to enable me to retire early, that I may have missed a few critical things along the way in preparation for my early retirement.  I am a Plan A-type of person, always insuring that I have a ton of activities (huge lists) to accomplish over the next 30 years.   My style is one of focus and completion – one thing at a time, I guess.  This served me well in my work years, very well actually.  However, I am seeing that in the retirement world this may be a bit of a problem area that I need to work on.  Perhaps a bit more flexibility and versatility is needed in my regiment?  Here is my story:

I was fortunate to be granted a sabbatical (of sorts) in 2013 to hike the Appalachian Trail (AT), a foot path that runs through 14 states from GA to ME and covers 2,189 miles.  While a difficult task it reignited a love for the outdoors which I had held since a child growing up in a very small town in Western NY.  It also encouraged me to continue my dream of seeing the US in a very different way. Much like Fritz, I was blessed to have traveled extensively during my working years and even lived in Europe for 6 years.  My desire was to now see the US by foot, if possible (or bike) and really experience our country. “Soak it in”, if you will.  This would include hiking the 3 long trails in the US, and thus completing the “Triple Crown” of hiking in the process.

The AT was complete and I was now on to the 2nd trail – The Pacific Crest Trail (PCT) running from Mexico to Canada roughly 2,600 miles through 3 states.  I started the adventure on April 22 at the Mexican border and at just 3 weeks I had already completed 400 miles.  The trail was absolutely wonderful and my body was adjusting to the daily activity, or so I thought.

Just past the 300 mile mark my foot started to hurt more than normal and the swelling would not completely go away in the evenings.  Just past the 400 mile point I was able to get a ride into town, and a few hours later would learn that a bone in my right foot had broken.  I was fitted with a (anything but hiking) boot to help heal the break. The Doctor in the critical care unit said I would be out of the boot in just 6 weeks.  I calculated it all out again and decided I could make it to Canada before the snow fell if I started promptly on the 6 week mark and crunched out a few more miles per day than I had originally planned.

I came home for recuperation and adhered strictly to what the doctor told me to do.  After 5 weeks I went in to see my Orthopedic Doctor and was told there was no way I would be able to complete the PCT in 2016.  I was not prepared for that news, and it crushed me to the core.  I didn’t really have a Plan B – not really, and I was adrift in a sea of What The Heck …

Next Steps:  Developing Plan B

After throwing myself a World Class pity party, and licking my wounds for a couple weeks, I revisited the list of things I wanted to do while I was still physically able.  After all, that’s why I retired early wasn’t it?  So I set to work on creating a “Plan B” for 2016.

Yes, I will return to the PCT in 2017, that’s what people like me do, but let’s figure out what the rest of this year looks like. Some of the items would still have to wait as I wanted to do them later, such as take the Alaska Ferry from Bellingham WA to the Dutch Harbor.  However, there were still activities that were not as physically demanding as five straight months on a trail that could be brought forward.  How about visiting and hiking some of the National Parks?   I want to visit and experience them all eventually, so a 4+ week road trip seems like a great way to get us started.  The ones we’re initially targeting are all in a general area: Zion, Arches, Bryce Canyon and the Grand Canyon.

My wife and I decided to build a road trip in which we would be able to see friends and family along the way and see these wonderful sites. Things started to look up.  I also decided to complete the Benton MacKaye Trail (BMT) this year, as I hiked the first 150 miles in 2015.  This would be completed near the end of August, so cooler and beautiful weather should prevail.  I may even do some trout fishing through the Smoky Mountains which the BMT passes through. Finally, and probably one of the things I should have done while I was working, was to join a few groups in “Meetup” where like-minded people from my area gathered to hike, kayak and do all sorts of other adventures.

In retrospect, what would I have done differently?

As this is a financial blog some updates on that front as well.

I hope you found this interesting and helpful.  Good luck in your retirement – Kirk and Mona

Fritz here, with some closing thoughts on Kirk’s guest post.  Having been close with him for years, it’s been interesting to watch him prepare for, enter, and adjust to retirement.  Since I’m still in the “prepare for” mode, I view his journey as a player views his coach.  He’s been there, and he’s teaching me how to be a better player.  Hopefully his article has been a teaching lesson to you on the importance of realizing your plans in retirement will change, and it’s good to put some thought into “Plan B’s” prior to your retirement.

I encourage you to leave a comment encouraging our friend, Kirk, or providing any insights you’ve learned from your own transition into retirement.

In closing, if any of you have interesting stories about your retirement experience, I’d be happy to consider a guest post.  Just send me an email at fritz@TheRetirementManifesto.com, I’ll have a look at any draft guest posts and share it with my readers if I think it’ll be of interest.  Thanks for your loyalty to The Retirement Manifesto!