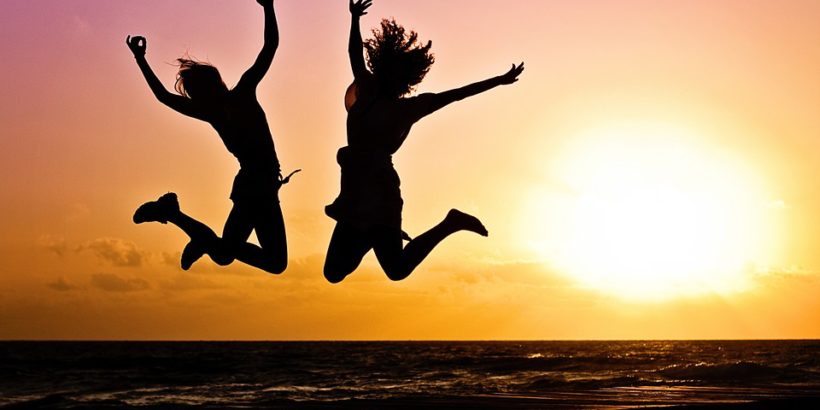 I hate New Year’s Resolutions, and I can’t remember the last time I made one.

Why make them, if you’re most likely going to break them?  That doesn’t make sense to me.  Call me cynical, but that’s just not the way I think about challenging myself to improve.

Don’t get me wrong.  I love thinking about how I can move life from Good To Great, and I enjoy having goals.  I think often about both my long- and short-term goals, and where my life is going.  I do it informally, by constantly watching for opportunities to create improvements in my life and developing personal challenges.   I push myself to achieve the goals I set for myself (like writing this blog).  Do you?

The Thing Is, Don't wait until New Year's Eve to do it. Do it all the time. Click To Tweet

Make the pursuit of challenges an ongoing habit in your life. It’s a way of Living Life At The Limits, and it keeps life interesting.  Most of you know that I’m a bit of a fitness nut, and I’m always on the lookout for opportunities to challenge myself.  I grab onto interesting things as they cross my path.  It’s why I swam in the cold waters of London on an early November morning.  It’s something that keeps me young.

It works for me.

Try it……It just may work for you.

Today, I’ll give you your chance….

A Bunch Of Folks Decide To Get Younger Together

Do You Want To Be Younger?

This development is a legitimate way to make you Younger In 2018 Than In 2017, if you’re willing to commit to doing a bit of work. A bunch of folks are joining in, and this thing is gaining momentum.  The fact that it’s timing falls in line with New Year’s resolutions is irrelevant, in my book (tho, in fairness, it’s a good time to launch the challenge, as many folks are thinking about trying to get into shape for the New Year).

This movement is a great opportunity and I’m convinced that it can, indeed, help in your quest to Achieve A Great Retirement (my byline).  It’s a group of friends with similar interests urging each other on to mutual success.  If you’re interested, check it out.  You don’t have to commit today.  Just explore and see if it’s something that interests you.   I’ll show you below, but in case you’re impatient and just want to head over there now here’s the link, but please don’t go there yet 🙂

The group’s open to all, and readers are especially encouraged to participate.

The excitement all started on Dec 31, 2017 when Vicki @ MakeSmarterDecisions sent the following Tweet and, in the process,  Launched A Movement……

What’s Younger Next Year All About?

Ok, a quick little background so you know what all of the excitement is about.  Younger Next Year is a concept developed by the late Dr. Henry Lodge.  He launched the whole Younger Next Year movement with his New York Time’s bestselling book “Younger Next Year”, co-written with one of his patients Chris Crowley (A lawyer who retired in his mid-60’s and applied the principles in the book in his own life, with amazing results).

As a medical doctor, “Harry” built a program that’s based on medically-supported common sense, and (most importantly)…

Scientifically proven, over several decades and counting.  With many clients who are out skiing this winter in the Western Rockies  (or Tahoe or Whistler) even though they’re hitting their mid-70’s…

I’m pursuing it, and I encourage you to do the same.

The formula developed in the book is fairly straightforward.  Without giving away the entire book, it boils down to getting 45 minutes of moderate exercise 6 days a week.  A moderate walk counts.

Just get your body moving for 45 minutes a day, at a moderate pace. It's not that hard. #YoungerNextYear Click To Tweet

The book is well worth a read, and I guarantee it’ll motivate you to give it a try.  I get no commissions from the book sales, I’m just passing it along as a helpful tip to a friend.  It’s what friends do.

A friend first recommended the book to me a year ago (thanks again, Montana Money Adventures), and I was hooked   It really motivated me to get serious about my physcial fitness.  I wrote a post about it, which you can read at Do You Want To Be Younger Next Year?

How A Movement Goes Viral

I may be over-exuberant in my excitement.  I do that sometimes.

It’s too early to call, but this most recent development just may go viral (there’s that over-exuberant bit).  Regardless, the activity over the past week has been fascinating.  I’ve not been witness to a movement that’s actually gone viral, but I think this one has a shot.  I sincerely hope so, as I believe strongly that it’s a movement that could benefit millions of people, including you.

Jon is all over the Younger Next Year initiative, and promptly jumped in to promote the movement to his 67,000 Twitter Followers (!!!!!).  He also launched the announcement to his 3,922 followers on LinkedIn: 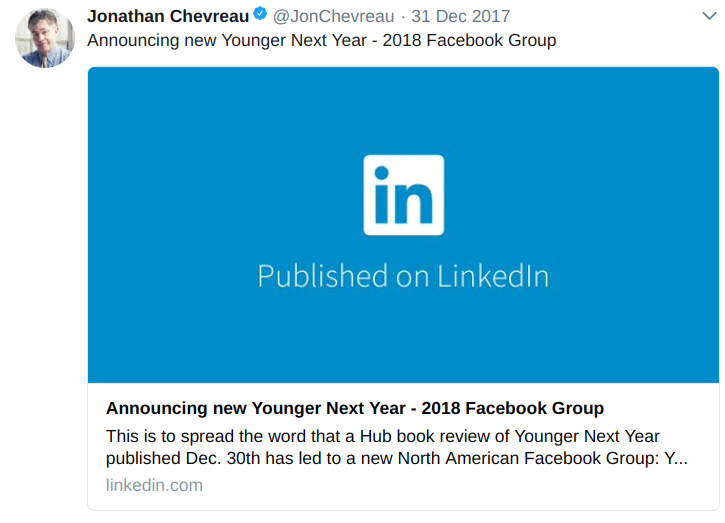 Jon is a huge fan of this concept, and he’s putting his weight behind the concept.

He’s got a lot of weight.

I’ve enjoyed interacting with Jon over the past week via email.  I don’t know him well yet, but I suspect he has a real Passion for the importance of physical fitness.  I sense that, anyway, and I really hope it’s the case.  There’s nothing better than chasing a Passion – we should all Strive to do the same.

Jon wrote an article this past weekend on the movement titled Younger Next Year 2018: A New Facebook Group. He also blew me away by asking if I would grant permission for him to post my Do You Want To Be Younger Next Year post on his massive (this thing will reach the world!) site Financial Independence Hub.  I’m humbled beyond words and look forward to seeing where this goes.  (For the record, Jon may post this article instead.  We’ve agreed that he’ll choose based on which article will best connect with his audience.  Cool how this Blogging Community thing works, right?)

The Bottom Line:  This thing is getting visibility.

So…the movement is launched.  The only question is whether or not you want to get involved.  Are you in?

What have you got to lose?  (besides a few pounds, haha – I hate corny jokes)

If you want to get involved, it’s easy.  Simply click on this Facebook Link to join the group. Vicki and the (rapidly growing) Gang will welcome you with open arms. For those who are more visually inclined, here’s a pic of the FB group (just click anywhere on the pic to join):

A Goal That Will Make A Difference

As we all work toward building a Great Retirement, it’s important to focus on maintaining our physical health. Health is not an assured thing, and we’re all getting older.  Things happen, but wouldn’t we benefit if we delayed the inevitable decline by 10 or 15 years?  It’s possible, and folks are doing it.  It’s an important element of retirement planning to think about what you can do to ensure you’ll be able to do the things you want to do and to do them for the longest time possible.

I Don't Know About You, But I Want My Retirement To Be Filled With Many Years Of Good Health. Click To Tweet

Who can argue with increasing the odds of being able to to do the things you want to do?  Things like…..

In the words of that memorable Jimmy Buffet hit “Growing Older But Not Up”,

Conclusion – Do You Want To Be Younger?

As you think about creating your Great Retirement, take time to seriously consider your physical health.  The benefits to our lives, especially as we age, is worth the effort to develop some habits.  My wife’s thinking about trying Yoga.  I really hope she does.  I’m trying to start running a bit more.  What are you doing?  Feel free to leave a comment about what you do to keep in shape or suggestions for beneficial things that others could try.  Let’s start a discussion.

If you’re interested in checking out the newly formed Younger Next Year group,  simply click on the Facebook Group Page. Feel free to come on in and have a look around.  Decide if it’s something that works for you.

Everyone’s welcome, and everyone can benefit.

I hope to see you there.