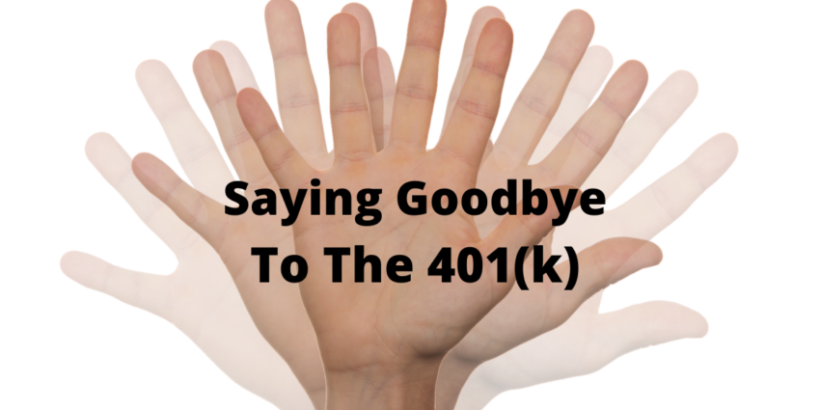 She’s been a part of my life for 38 years, but the time has come to say goodbye.

With a dedicated line on my Net Worth statement since 1985, it’s sad to see her go.

She’s worked hard for a long time. She even made me a 401(k) millionaire.

Most importantly, she helped me to retire young.

Today, the reasons I decided to close my 401(k) and roll the funds over to individual IRA and Roth accounts.  It’s something I always knew I would do, and I finally did it.

Today, I’ll tell you why. 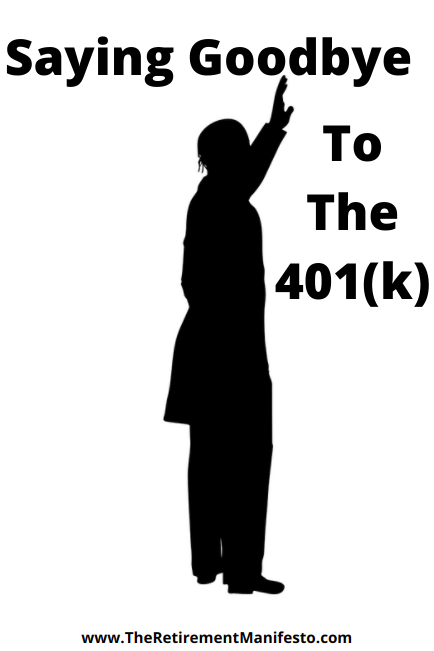 Our relationship started in July 1985.  I was fresh out of college, and my boss told me the 401(k) was something I should sign up for during my orientation process.  “Get the match,” was the message, and I listened.  I didn’t really know what I was doing at the ripe old age of 22, but I became a serious student in the subsequent decades.

I won’t bore you with the details of our 38-year relationship.  If you want the full story, I encourage you to read the popular guest post I wrote on Budgets Are Sexy titled “How To Become A 401(k) Millionaire”. That article shares the steps I took to make the following growth happen (chart from the same article): 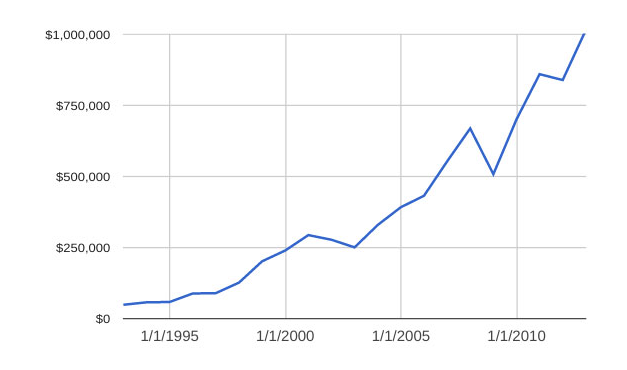 The Past vs. The Future

I now consider that article a eulogy to my old friend. She’s a relic of my past, and I’m looking to the future.  The 401(k) referenced above no longer exists.  Like so many of our heroes who have contributed to their cause and ultimately passed away, she’s done her job and faded into history.

She served me well during the Accumulation Phase when I was diligently dollar cost averaging with every paycheck.  But the past is the past, and she’s no longer meeting my needs in the Withdrawal Phase.

I’ve got a new girl.

Two girls, actually.  One is my lovely pre-tax IRA, and the other is my beautiful Roth.  Our relationships are much better suited for my retirement years, and I suspect I’ll spend the rest of my life with them.

Why the change?  Read on…

Every employer custom-designs their 401(k) program, so I don’t know how common the pitfalls I faced with my 401(k) are in the industry.  I suspect the shortfalls are not unique to my plan, but only you can provide that answer.  For the record, both my 401(k) and personal IRA and Roth accounts are with Vanguard.

Below are the biggest issues I had with my 401(k):

The biggest reason I closed my 401(k) was the frustratingly difficult process of doing my annual Roth conversions in retirement.  Online conversions were not available with my 401(k) plan, so I had to work my way through the Vanguard voice network and contact a representative to initiate each conversion.  This entailed having to…

Contrast that to the simplicity of doing a Roth conversion via a personal account at Vanguard.  Since I already had a personal Roth and IRA, I used them for a trial Roth conversion earlier this year to test the process.  I was blown away by how simple it was.  Two online clicks (from…to) and I was done.  As with my retirement conversions, there was no tax withholding on the conversion, which is the way I prefer it (I calculate it into my quarterly estimated tax payment). It took me less than 5 minutes, and I made up my mind on the spot…

A few years ago I discovered a fact that influenced my decision to close my 401(k). For those who don’t know, Roths held in a 401(k) are subject to RMD’s, whereas Roth’s held in a personal account are not.  While the RMD’s don’t kick in until age 72, I knew I’d have to close the 401(k) at some point to avoid the forced distribution.  Now, I don’t have to worry about it.

On a related note, I expect the IRS will recognize this difference and likely implement RMD’s on personal Roth accounts in the next 10 years, but time will tell.  For now, my Roth funds are not subject to RMD’s and I hope it stays that way.

Our plan’s 401(k) was accessed through a separate “Retirement Plan” area on the Vanguard website, and I never cared for the design.  It showed the entire 401(k) balance without an easy way to see your holdings broken down in the Roth and the IRA portion.  You could see what funds you held, obviously, but you couldn’t tell how much you held in each of the tax classifications.  When I update my Net Worth (get your free Net Worth Template here), as part of my Year-End Financial Review, I break down my holdings by tax status (After-Tax, Pre-Tax IRA, Roth, etc) and it was a hassle to click, click, click, click to find that level of detail.  Then, I had to do a manual calculation to break down the holdings, which were only shown in aggregate.

Contrast that to the simplicity of viewing your holdings in personal IRA and Roth accounts.  They’re clearly broken down on the main Vanguard page, and there’s minimal work involved to input them into my Net Worth statement.

My 401(k) had funds that were in two different tax classifications, Pre-tax and Roth, as I had contributed to both during my career.  The problem was that all of the holdings were equally divided between the two types of accounts, and I had no way to move my holdings between the two.  As I mentioned in our Retirement Drawdown Strategy, some types of assets are better suited for pre-tax, and some for Roth (others are best suited for after-tax).  I explained the issue in that post, and summarized it in the following table: 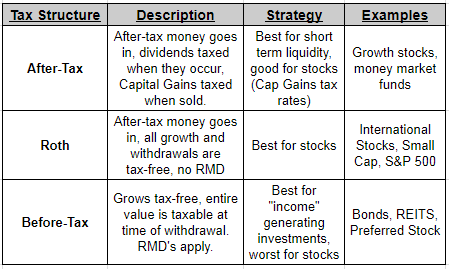 I’ve always viewed the “tax location optimization” as a fine-tuning element that wasn’t critical to our portfolio’s success, but still.  Having the ability to locate your highest growing (stock) funds in your Roth (and not your Before-Tax IRA, where they’ll eventually be taxed as income) should be a basic functionality of any retirement 401(k), but it wasn’t.

Contrast that to having the funds in personal IRA and Roth accounts, where the funds are easy to see and manipulate.  Since converting my 401(k) into a personal IRA and Roth account, I’ve begun migrating the assets into the tax classifications for which they’re best suited.  For example, I transferred the entire S&P500 holding out of my Before-Tax IRA, moving the funds and into REITS and Bonds. At the same time, I did the opposite transaction in my personal Roth (selling REITS and Bonds, and buying the S&P500).  My asset allocation remained the same, but now my entire S&P500 holding is in my personal Roth, and my bonds are in my Before-Tax IRA.  Over time, the S&P500 should outperform the bond holdings, and all of the additional growth will be tax-free since it now resides 100% inside the Roth account.

Note:  if you’d like to read a good summary of this tax location issue and its impact on your taxes over time, check out this article from Kiplinger.

Transferring my 401(k) into my personal IRA and Roth accounts eliminated an entire account in my portfolio.  I’ve been working to simplify my portfolio, and this fits well into that strategy.  I’ve done a similar thing with my peer-to-peer Real Estate exposure, closing my Prosper account and consolidating the exposure into my Peer Street account.  I’ll continue to work to simplify my accounts every year, it just makes sense in my opinion.

I should note that my 401(k) had a good selection of funds and low expenses, so neither of these influenced my decision.  That said, having the funds in my personal IRA and Roth accounts does offer more fund selection.  Also, I changed my IRA and Roth accounts from standard accounts to brokerage accounts this year.  If you own funds with Vanguard, they’ve likely notified you with a request to convert to a brokerage-style account.  Be warned, they’re going to start charging a fee (can’t recall how much, sorry, think it might be $20?) per fund if you’ve not yet made the change (the charge will only be applied on the standard accounts, not the brokerage ones).

6. The Ability To Build A CD/Bond Ladder

Finally, now that all of my funds are in brokerage accounts I can also buy other types of assets outside the Vanguard family. Yesterday, I started building a CD/Bond ladder in my IRA to gain experience.  Following the example my friend Jim @ RouteToReire did and explains in Opening The Books To Our Investment Portfolio, I made my first Invesco Bulletshare purchase (2025), layering in some CD’s in the shorter timeframe.  Here’s a tweet I sent yesterday outlining the rungs: 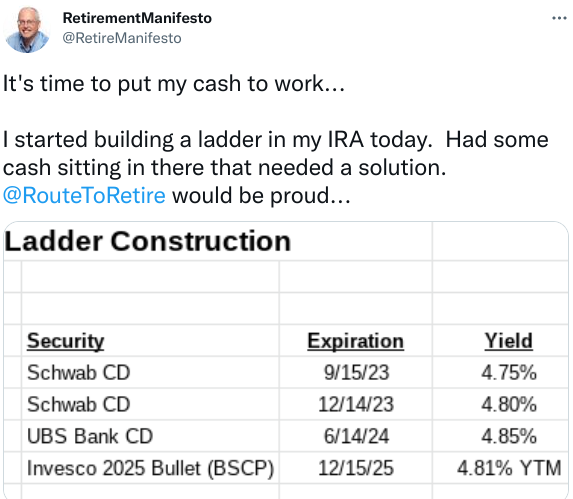 Gaining the access to additional fund types was only made possible by converting my 401(k) to individual Roth and IRA accounts. It’s nice to have the capability to finally start building the ladder, I’ve thought about it for several years and can finally say I’m taking concrete steps in that direction.

Finally, a note about the process of closing my 401(k).  It wasn’t as easy as I had hoped, but I survived.  Similar to when I would do my Roth conversions from my 401(k), I had to work through numerous Vanguard representatives until I found someone who knew what they were doing.  Fortunately, it didn’t require the “snail mail” hassle, but it was still laborious.  The rep had me verbally confirm the conversion (on a recorded line) of every individual holding, and I was required to click on an e-mail confirming that the changes were what I had intended.

A second frustration:  Although I had existing personal IRA and Roth accounts, for some reason they were not able to transfer my 401(k) directly into those accounts.  Rather, they had to establish two new accounts (Before-Tax IRA and Roth), which resulted in my having two of each type of account (two IRAs, two Roths).  Once the accounts were funded with the closed 401k proceeds, I transferred each fund into my brokerage IRA and Roth accounts, eliminating the extraneous accounts.  It was a bit of a hassle, but it was a “one-and-done” effort.

Lastly, since I moved the Before-Tax portions of my 401(k) into my personal Before-Tax IRA (and, Roth to Roth), there were no tax consequences since all funds remained in the same tax classification.

It’s been a good run with my old and faithful 401(k).  However, as my needs changed in the Withdrawal Phase of retirement, it was time to better align my holdings to a fund style that better met those needs.

The takeaway:  Realize you’re not married to your 401(k) sweetheart after you retire.  If you’re finding yourself dealing with some frustrating issues with the way your employer has designed your 401(k), it’s worth investigating whether it’s worth converting yours into personal accounts.   It’s up to you to decide if it’s worth saying goodbye to your 401(k).

And now you know why.